Hello! This week’s blog post has been rewritten after the fact, as its contents were lost due to the hacking of our friend’s hosting site on Thanksgiving. We apologize if you lost a comment and welcome you to leave a new one. This writing is shorter than the original, since my practice is to write during the week fresh from feelings, experiences, and reactions, though some memories, aided by photos, are indelible.

When we left our hotel in Cairo at about 8pm for our 12:50am flight, the traffic toward the airport was as heavy as when we had arrived. Fortunately the sufficient advance departure allowed us to easily arrive in time for our flight. We made an acquaintance while going through the second security checkpoint and had a very nice visit in the waiting area as we were on the same flight. When Loren and I first left home in April, 2014, we had had great expectations to be able to use our accumulated frequent flyer miles on our Journey. However, that has not been the case very often. However, for this flight – from Cairo to Kathmandu, we were able to use our miles. When we arrived for a layover in Abu Dhabi, we were greeted with a creatively constructed control tower.

It was here that the airline was unable to confirm our seats for our next flight because Economy class was overbooked. In the end we were upgraded, which could not have been a nicer gift, both to make up a bit for not being able to use our miles much on our Journey, but also because we had not slept very well on the first flight. Later we received another gift. When we approached Kathmandu airport, the pilot announced that there was no gate available – this is the busy season to visit Nepal as the cloud cover over the Himalayas is often lifted. As we passed the time flying slowly around the area, the views of a multitude of green covered mountains, then of Kathmandu, were outstanding. 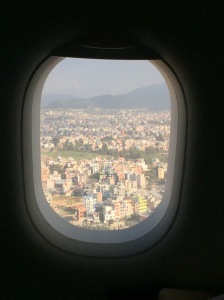 After a chaotic taxi ride through disorderly traffic driven on the left side of the road, we arrived at our AirBnB hotel in Kathmandu. The next day we moved to “the AirBnB room,” which to our delight was more cheerful thanks to its southerly facing windows. A beautiful yellow butterfly greeting us in our new room added to the charm. We first photographed it, then helped it find its way outdoors. 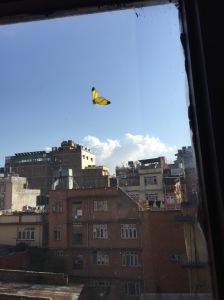 We rested up at our hotel for a couple of days, taking our meals in the tranquil, pleasant restaurant downstairs from our room, which at night features candle lighting.

When we finally ventured out on the streets, we found a maze of shops, businesses and restaurants on narrow lanes, decorated overhead with numerous strands of prayer flags. The challenge was and is the mix of poorly maintained pavement combined with vans, cars, motorcycles, scooters, bicycles, rickshaws and pedestrians all competing to pass. Our hotel owner had directed us to a western fare restaurant where we enjoyed the food while listening to tunes from our youth, replete with 1960’s style black lighting.

We soon become more acquainted with our Kathmandu neighborhood called Thamel, also nicknamed the “Tourist” neighborhood, by walking more of the streets. In addition to several Hindu shrines and temples and Buddhist images and stupas, sadly we found some buildings in grave disrepair or states of devastation, reminders of the massive earthquake that occurred here in April, 2015. 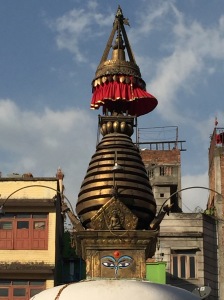 We started in on planning the next couple of months of our Journey, then, we booked a trek through our hotel owner’s travel business. We wish you, those who celebrate, a wonderful and Happy Thanksgiving! While you are eating turkey dinner, we expect to be taking in views of the Himalayas… 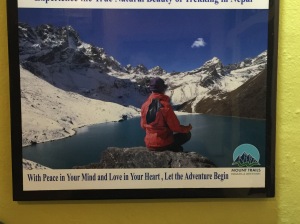