On April 5, we rented out our house and began our 25-year-long-held-dream of going on extended, world-wide travels. We started off going south, then north in California, up the west coast, and across parts of the northern U.S. and Canada, staying with friends and family, meeting wonderful people, and seeing gorgeous places in Washington, British Columbia, Idaho, Alberta, Montana, Wyoming, South Dakota, Minnesota, Manitoba, Nebraska, Missouri, Indiana, Ohio, Pennsylvania and New York. 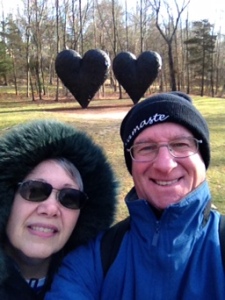 Beginning in April, we left the San Francisco Bay Area and flew to Las Vegas, Nevada, for three days. We then drove through Tecopa, California, then on to Los Angeles for Claire to spend nine weeks to become a Certified Bikram Yoga Instructor. During her training, Loren spent the rest of April backpacking and exploring on his own in Joshua Tree National Park and with a friend in Death Valley National Park. In May and early June he split his time between staying with his Mom and sister, which included doing a remodeling project; and, in the San Jose area staying with various friends. The last 2 weeks of June we were together again, staying with various friends and Loren’s Mom and sister in the San Francisco Bay Area.

In July, Claire began teaching Bikram Yoga in Lake County, California for one month, while Loren backpacked at Lassen National Park, the Marble Wilderness near Mount Shasta, and the Lost Coast. We had another week together in Lake County, then in August, Claire spent a second month teaching Bikram Yoga in Lake County, while Loren drove north to visit and hike with various friends in Oregon and Washington, preach in a Unitarian congregation in Olympia, and backpacking in the Rain Forest and at Mount Rainier.

On August 31, Claire flew to rejoin Loren in Seattle and we spent time in and around Port Angeles. We drove to Victoria and to Sidney, British Columbia, to see Butchart Gardens and for Claire to teach a Bikram Yoga class. We then drove to San Juan Island, Washington, where we visited with friends for a few days, which included sailing around the islands. We then drove through the beautiful North Cascades and on into Spokane to visit with another friend for a few days. We traveled to Lake Pend Orielle in Idaho and spent 2 nights before heading to Alberta, Canada, to see Lake Louise and the Icefields Parkway. We had several days with both good and not so good weather for hiking and taking photos!

We drove on to Calgary to attend Sunday UU worship and for Claire to teach several Bikram Yoga classes. We then visited for two nights with friends and enjoyed a walk, catching up on movies, eating, and visiting. Driving south we spent rainy and overcast days in Waterton National Park but saw three grizzly bears – a mama bear with two cubs. In October, we returned to the U.S. to spend several days in Glacier National Park, where we hid from the storms in Polebridge and Home Ranch Bottoms North Fork, both outside the park. We were able to hike the delightful Trail of the Cedars, drive up Going to the Sun Road, and see some spectacular scenery.

We headed further south in Montana and stayed a week in Missoula for Claire to teach more Bikram Yoga classes. It was inspiring to find a focus on Peace in the Missoula community. We then drove to Bozeman, where we attended UU Sunday service, and enjoyed the hospitality of new UU friends. Claire taught Bikram Yoga and took class from a classmate – “littermate” from her training. Driving east from Bozeman, we visited the historic places of Pompay’s Pillar; Little Big Horn; Deadwood, South Dakota; Crazy Horse Memorial, and Mount Rushmore. On the way we also saw the unique formation of Bear Lodge – or known by European Americans as Devil’s Tower.

It was on to Minnesota where we had a delightful visit with dear friends overnight, and where Loren appreciated helping to harvest some corn. We then spent several days in Minneapolis for Claire to take and teach Bikram Yoga. While here we saw an interesting Omni film about the migration of monarch butterflies at the Science Museum, saw historic downtown, and visited our friend at her job where she works with youth for peace. We also enjoyed two meals with more good friends before leaving Minneapolis.

We drove again north into Canada, this time to Winnipeg where Claire took Bikram Yoga classes from two other classmates from training. From here we boarded a train to Churchill where we saw a couple of polar bears on the Hudson Bay. Unfortunately a freak accident on the train that seriously injured one of Claire’s fingers necessitated a trip to the Emergency Room for serious stitching and a Tetanus – actually a TDAP, shot, which had her confined to the hotel room for nearly the whole visit. Another two day train ride back to Winnipeg started out our November, and we spent an enjoyable overnight with a yoga teacher friend. With her we visited more polar bears at a new zoo exhibit, and, toured the newly opened Canadian Human Rights Museum. The weather began turning even colder here…

We drove south to Omaha for Claire to teach a few Bikram Yoga classes at a beautiful new studio there. Driving just an hour and a half south of Omaha we then spent a wonderful week visiting with Wright side cousins. Loren enjoyed playing a bit of indoor basketball, and, repaired a leaky stovepipe. We both helped chop and stack wood, and thoroughly enjoyed visiting with these dear cousins and other extended family who also came to visit from nearby.

On our way driving off from Nebraska to Indiana we stopped to see the St. Louis Arch, an impressive tribute to Thomas Jefferson and westward expansion. We arrived in Terre Haute, Indiana to spend two nice nights with a UU host, who graciously showed us around. We were in the Terre Haute UU pulpit just before a snow storm arrived. The next day we braved the roads to travel to Cincinnati to visit with Claire’s cousins. We spent two lovely nights catching up and enjoying their two fun bird dogs, while snow continued to build up outside.

We took a Bikram Yoga class in Cincinnati, then drove to Columbus, Ohio to visit with a friend who lives near there. We stayed overnight in the 3rd floor walkup of an AirB&B host. The next morning we set off for Lebanon, Pennsylvania, near Harrisburg, to visit a longtime dear friend for several days. While there we took a day trip to tour the Gettysburg battle sight and can highly recommend the museum at the visitor’s center. Before leaving Pennsylvania we took a Bikram Yoga class in West Reading.

From Pennsylvania we drove to Westchester County, New York and arrived just before a huge snowstorm. We enjoyed a delicious Thanksgiving with Claire’s cherished brother and family. We stayed in their lake home most of the month through late December, which afforded us a marvelous respite. Together we visited the first Winter Wonderland at Kensico Dam, and we hosted them for a couple of Sunday family dinners too.

We had a memorable visit with dear friends in Kinderhook for 2 nights and turned the calendar to December with enjoying taking in the nearby Normal Rockwell museum in Stockbridge, Massachusetts together. We had a lovely dinner and visit in New York City with friends, then stayed overnight to enable us to see Awake in Greenwich Village the next day, a movie shown in limited theaters. We also drove to Hyde Park to tour FDR’s impressive Presidential Library, and stopped to see his and Eleanor’s former homes. We spent a short bit of time late one evening to see the site of the Revolutionary Battle of White Plains, Claire’s hometown. We took a Bikram Yoga class nearly every day in Yorktown Heights, and Claire enjoyed taking more classes from training classmates.

We also enjoyed singing with the choir of the nearby Unitarian Universalist congregation on Christmas Eve, and attended a couple of Sunday Services, choir rehearsals and a choir party with them. We had a special Christmas day with Claire’s brother, his wife, her father, and two nieces. We then drove to Massachusetts for a sweet overnight visit with dear California friends who were visiting family. Together we went to services at the local Unitarian Church and drove by a home they are contemplating buying. We enjoyed a wonderful family gathering at cousins of Loren’s, also in Scituate, Massachusetts and spent a couple of nights for a lovely visit. We then went to see part of downtown Boston, and visited JFK’s Presidential Library before returning to New York for New Year’s Eve.