Brief Memories of the Year, through November 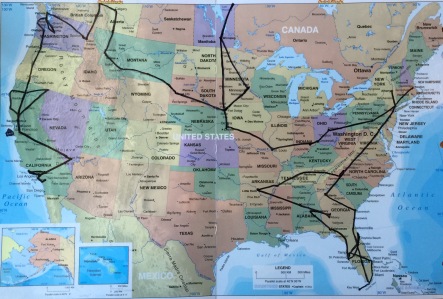 We did travel south and north through the eastern states – Florida through Maine – except Delaware, we just could not fit it in during this time, and, most of the other southeastern states – Alabama, Mississippi, Arkansas and Tennessee. Because Loren and I were at odds over how long to stay in Central America, we ditched that plan – for now, and instead added traveling further north to visit to eastern Canada – Nova Scotia, Prince Edward Island, and New Brunswick. Afterwards, we drove south again to New York. We decided to leave our van with family – after realizing that with each European country having an import fee, in addition to exorbitant overseas shipping fees, the costs of taking our own van with us were just prohibitive.

Here are a few more images showing where we traveled in the USA since April, 2014:

We then began our travels in Europe and went to see people and places in Ireland, Northern Ireland, England, Scotland, Wales, France, Netherlands, Germany, Italy, and Switzerland. We are currently in France, and plan to spend the rest of our time in Europe – for this year, in northern Italy.

We anticipated more adventure before year end, which included beginning travels to Africa at the end of November… please read about these weeks in our review of 2016.