Dear Family and Friends, Thank you so much for keeping up with us, here on the blog, via email, or other ways. It is always wonderful to hear from you! Loren and I so appreciate your support of us. 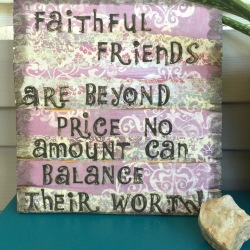 We started this week in Salina, Kansas, where we had a fun weekend visit with Loren’s former factory manager friend, and his wife. While there Loren and I attended a UU discussion on “What is Love?” followed by a Sunday service, where, as usual at a Unitarian Universalist congregation, we felt right at home.

Our friend then treated us to homemade dumpling soup for lunch. For dinner Loren made his Nonna’s pesto pasta, while the rest of us participated as Sous Chefs. Another wonderful visit with friends! 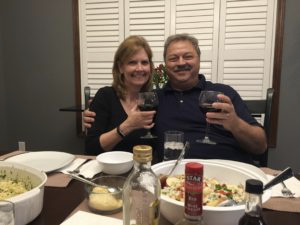 After several days of rain, the glorious sun graced us on and off for a couple of days, despite relentless and sometimes fierce cold winds. Before leaving Salina we visited The Land Institute, where Loren surprised himself with recollections of college learnings. Then we toured the factory before heading off eastward. 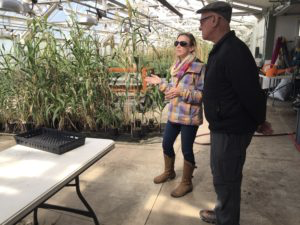 On arriving in Abilene we noticed Tornado Alley lanes, so, after finding our campground, we returned to bowl. It took us a while to get into a groove. In the 1st game I had a frame where I scored just 1 point, and earned only 2 spares the whole game. At least Loren broke 100. We finished that pitiful game with the scores of 74 and 109! During the 2nd game I outdid my first by the 5th frame with lots of spares, and Loren had 2 strikes after I corrected his arm vs. wrist twists. I ended up 2 points above Loren: 128 to 126.
It had been nearly 3 years since Loren and I had bowled, and that was with my brother and his family to honor my Dad just after his funeral. Bowling here brought up other memories – of childhood bowling with family, teen years with friends in a junior high league, and as a young adult in work and community leagues. It was after we were married that Loren first joined a league with me. Bowling provides decent exercise, though the words “the thrill of victory and the agony of defeat” ran through my mind. In our 3rd game, I scored my first strike, albeit in the 6th frame. I almost typed inning! We finished with 116 and 119, for averages of 106 and 118. It was nothing like my former games of 180-190 back in my best years, but again, a fun way to have a bit of exercise.
Our main goal in Abilene was to see Eisenhower’s Presidential Library, and we started with a tour of his childhood home on the same property. The docent there was excited because in about an hour he would be leading Winston Churchill’s great-grandson on a tour. After about 5 hours of us perusing the Presidential museum, closing time was announced, and as we quickly made our way outside. It turned out that David, Churchill’s great-grandson who was also finishing his tour, graciously held the door open for us. If we had been more prepared, we would have lingered more and possibly even invited the friendly Brit to join us for dinner…

We had planned to leave Abilene, but instead decided to spend another night so that we could return to Eisenhower’s Library, to take in what we had rushed past when the end of the day closing announcements were broadcast. So, that evening we returned to Tornado Alley where Loren and I had averages of 94 and 114, respectively. In the morning we returned to Eisenhower’s Library. We were shocked to discover that when we had finished visiting there, and, seen the additional World War I display in the Library, that we had spent another 6 hours. It was fascinating and so worthwhile to us.

Can you guess what we did then? We chose to spend one more night in Abilene, and went back to Tornado Alley. I located a ball that fit my hand better and had a more respectable average of 145. Loren’s was 133. With all 3 nights’ together, my average was 115, Loren’s was 121. 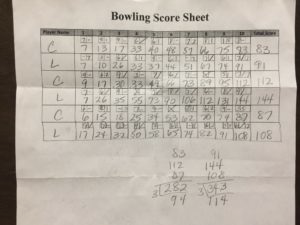 We spent the next day in Wichita, where we walked the trails at Great Plains Nature Center. We spotted much wildlife – geese, turtles,

and found an idea to ponder.

That evening we took a tour of Frank Lloyd Wright’s unique Allen House.

In the morning, we drove to Oklahoma City to see the memorial museum of the 1995 tragic devastation at the Federal Building. Now we are in Tulsa – the sun is warm and the gentle breeze is simply, cool. 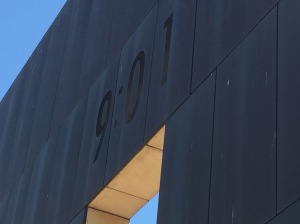 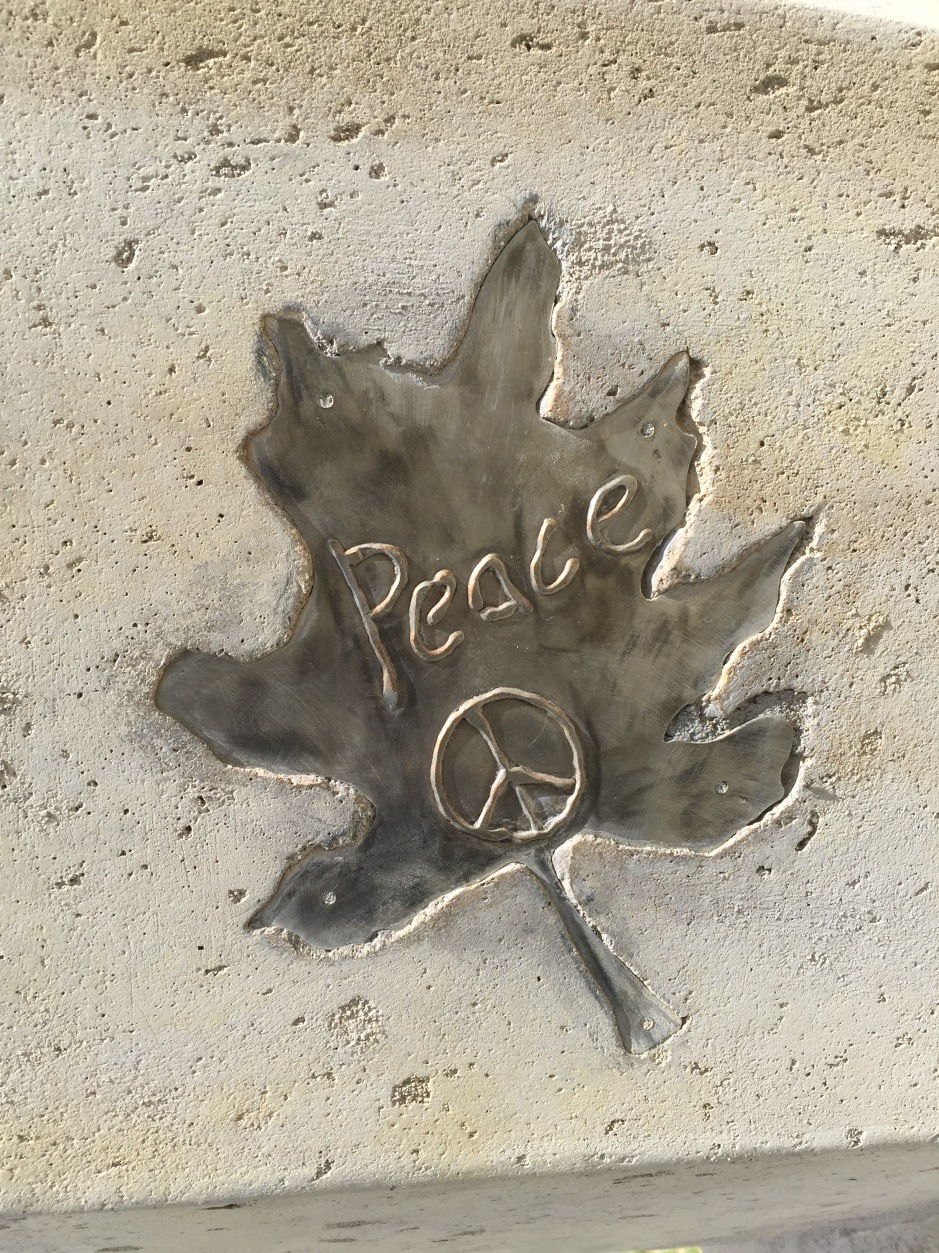 Loren and I started this week still staying at an AirBnB in Moffat, Colorado – in the San Luis Valley. The home was built using straw bales for insulation in the walls, not unlike the Earthships’ tires. On Earth Day we attended a memorable fundraiser with drumming, flute, and movement at nearby Joyful Journey Hot Springs. 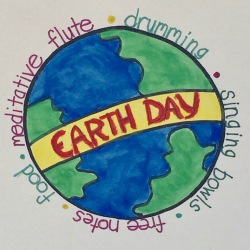 The next day we visited in Crestone, which is halfway between Santa Fe and Denver. It is hailed as a peaceful area, near wilderness and the mountains. One writeup of the place claims, “An ancient spiritual-scientific reason the land is so sacred, so powerful is it is at the convergence of ley lines – part of the Earth’s electromagnetic energy system like at Sedona and Mount Shasta, which creates vortexes of powerful energies for healing and higher states of consciousnesses.” Loren and I had a pleasant time here, hiking a little and enjoying a light meal at the local brewery. I was hearing Rocky Mountain High in my head, especially after noticing a sign for a particular new local retail outlet here. That evening we were treated to a glorious sunset. 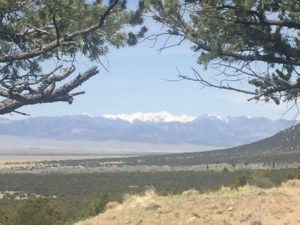 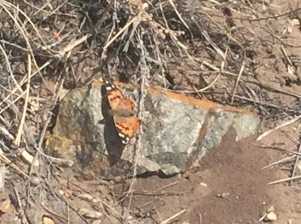 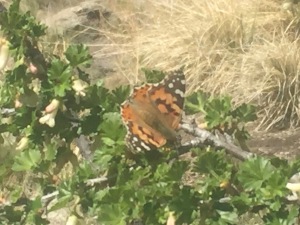 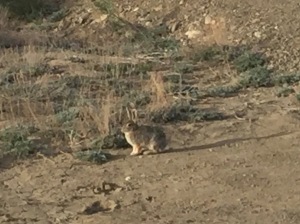 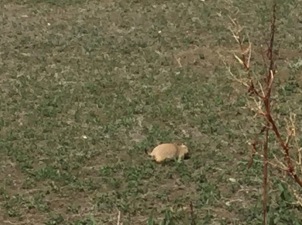 even yak and a snake! It is always a great pleasure to have time out in nature. 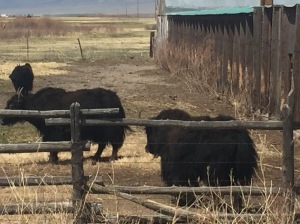 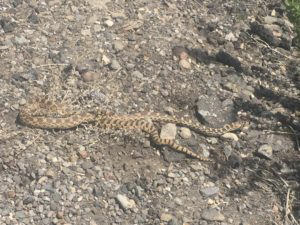 We then drove to Longmont to visit dear friends from our home UU congregation, who we had not seen for 17 years. We spent a fun evening enjoying good conversation and catching up over a wonderful dinner they prepared. We stayed overnight, and in the morning had a great walk at Lake McIntosh. I was especially taken with artwork there that was made to represent leaves. Our friend explained that there are 52 peaks over 14K feet in Colorado. We had views of Mount Meeker and Longs Peak, Longs being the northernmost 14Ker in the state. We hope to see these special friends again before another 17 years elapse…

We then visited more friends also in Longmont, and also formerly – though much more recently, of our UU Fellowship of Sunnyvale, California. We enjoyed a lovely overnight visit with them, including a walk around Longmont’s downtown. We did not know this couple well before we left on our journey and it was very sweet getting to know how much we found in common, and, how close they had become to several of our friends at home too. We hope to have more good visits with these friends again too. 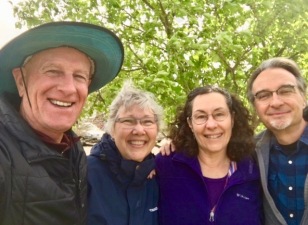 Then we spent a wonderful two nights’ staying with cousins in Littleton. A delightful though too short time together with thesegood-hearted family members!

From the Denver area we drove north to Kearney, Nebraska to see the founders of one of Loren’s former manufacturers, and their long time employees. It was another too short though meaningful time together with special friends.

Before leaving Kearney, Loren and I toured both the Museum of Nebraska Art (MONA), and the Archway Museum of Transportation. The latter spans from early Native American style to the modern Internet superhighway. Now we are enjoying visiting more friends from Loren’s work in Salina, Kansas… 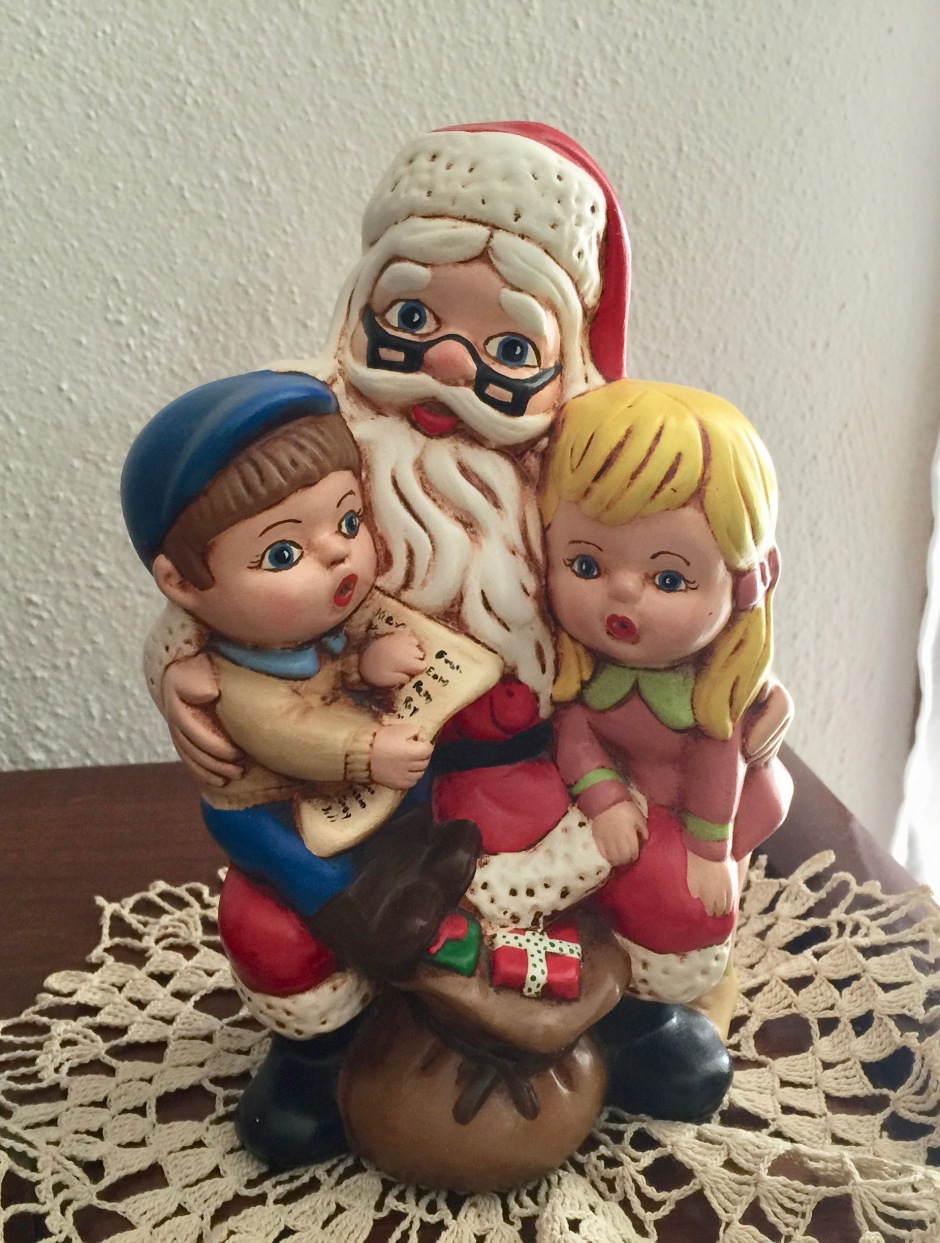 Happy New Year! We rang in 2017 with cousins on their farm in Nebraska. We aimed for playing cards all night! Well, we nearly did. Loren and I went to bed after 2:30 am, the latest we have stayed up on a New Year’s Eve for several years now. It was a very fun evening! 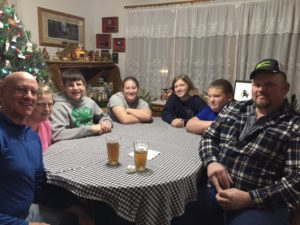 It was so good to be with these precious people again. Our weekend visit included going along to do a few farm chores… 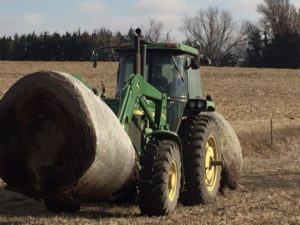 to Loren playing basketball and throwing the baseball with one cousin and his teens. It also included time to play with the dogs, attend church, visit other family farmhouses, and, play more cards.

We were lucky in that the Nebraska winter was mild, until after we left! So driving to and from the farm was easy. Our next drive day took us from Nebraska, through Kansas and Oklahoma, to Texas, and we were again lucky with the winter weather for driving. 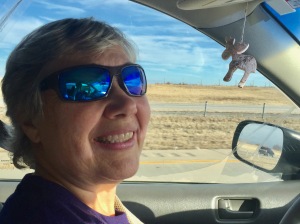 Starting in Fort Worth, we had a lovely dinner visit with more cousins. It was too short a time, yet most memorable, and for that I am thankful. That is my Mom, second from the left as an attendant in the wedding photo, and, the photo of four generations including my great-grandmother looks so very similar to another one that was taken of her, my grandmother, my Mom, and me. These are only some of the four generation relationships that my great-grandmother was a part of during her 100 years of life. 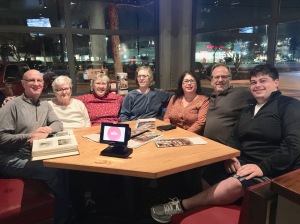 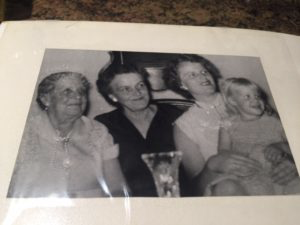 The Arctic cold snap that was predicted in Nebraska arrived in Texas too. Karen told us that they had been wearing shorts the day before, but for now it has turned bone chilling cold. In Dallas, Loren and I went to see the George W. Bush Presidential Center located at Southern Methodist University. It was very cold here too, nothing like Loren had envisioned of Texas. 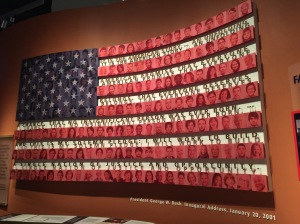 The next day, in the city called College Station we toured the George H.W. Bush Presidential Museum at Texas A&M University. It was still very cold.

Now we are in Austin and have seen the Lyndon B. Johnson Presidential Library at the University of Texas. As LBJ was in office when we were both quite young, Loren and I learned a lot about what life in the world was like during his Presidency. 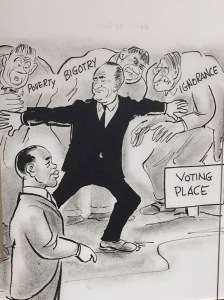 Still in Austin we have taken a Bikram Yoga class, and plan to do so on each of the next few days. It is also cold here, but, the yoga studio staff assured us, even if the weather is predicted to be bad, it is always good weather on Sundays in Austin. We will see…
In the meantime, Loren and I wish you a wonderful, happy, healthy, healing year, 2017!

This place holder is for the entries from our original blog to be added, eventually. Please check back – this re-creation is a labor of Love and will take a bit of  t-i-m-e- which, while still traveling, we do not always have a lot available to devote to this.