Loren and I spent the beginning of this week in Washington, D.C. After driving the many hours from New Hampshire, we settled in at our “Charming bedroom” in a house-over-100-years-old AirBnB, where our hosts helped us feel at home. We spent our first full and by the way, sunny, day, at The Newseum, located near the U.S. Capitol. Sadly, it will be closing its doors at the end of December because the building has been purchased. We felt fortunate in our timing, and thoroughly appreciated its intriguing representation of the importance of our 1st Amendment. My meager photos simply do not do it justice for all it offers. Loren and I were especially enraptured by the 100 Years of Pulitzer Prize Photographs Gallery, and could have spent much time seeing more of the films offered in their several theaters. Fortunately they intend to keep an online presence going forward. 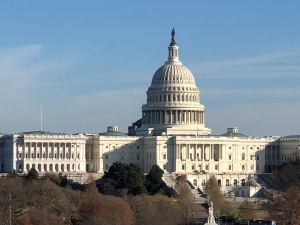 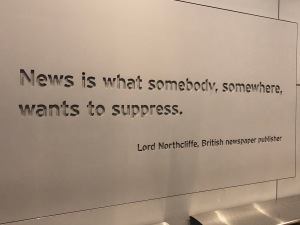 That evening Loren and I had dinner with a woman who we had met on our tour of Egypt, who lives in the DC area. I regret that I didn’t capture a photo of our time together, but the evening will not be forgotten. The next day Loren and I spent at the National Museum of African American History and Culture, one of the newest Smithsonian Institution offerings. It was well worth spending our entire day there. From the early history on North American soil to current contributions to sports and entertainment, it was a well conceived memorial and celebratory experience. 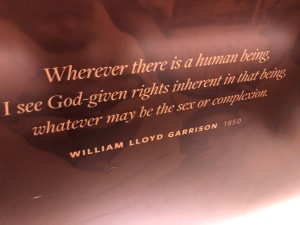 Loren and I stayed four nights in one of seven bedrooms at our AirBnB. After raising their family, our hosts opened their home to long term guests or to folks needing recurring local accommodations, all of whom who are delightful people. The hosts have more recently offered rooms to shorter term AirBnB guests, though they offer more than a place to stay. Our hosts provide a sense of a community — even a feeling of being family — through their benevolence. We enjoyed full leisurely served breakfasts, where over delicious food we each shared about our lives, and, over the next few days participated in deeper conversations and meaningful discussions. After touring the NMAAHC, Loren and I also enjoyed a pasta dinner with our hosts, one of their sons, and a couple of their long term guests and friends. After dinner a few of us had fun playing Mexican Train.

Loren’s and my last full day in D.C. was spent dodging rain visiting the U.S. Supreme Court and the Capitol. We had intended to sit in on the hour-long arguments of a Supreme Court case, but there was already a line, and a few at the front claimed all the available seats. However, a new line was formed offering a three minute viewing of the arguments and we jumped on it. Just to see the Justices in person and hear them questioning the attorneys was worth it. Additionally, we toured the building afterwards. I learned that William Howard Taft who is a distant relative of mine and who after his Presidency ultimately became Supreme Court Chief Justice until just before his death, was the driving force for creating a separate Supreme Court building. The court’s needs had outgrown their limited accommodations in the Capitol building.

We also learned that the Supreme Court, as the Judicial arm of our democracy’s three branch government is “the Guardian of Liberty,” and has an obligation to impartiality. From a highly knowledgeable woman at the Visitor’s Desk we also learned that of 8,000 cases requesting a hearing by the Supreme Court annually, only about 80 (+/-1%) of them are accepted to be heard. She continued on a more personal note, as a naturalized citizen in her accent that we found was of Uzbekistan origin, that when she arrived in the United States in 1989 she noticed, “Everyone has a smile!” “Why?” she wondered. She determined, “If they are fed, they smile.” She also happened to mention that William H. Taft’s grave is at Arlington National Cemetary.

From the Supreme Court building Loren and I walked to the US Capitol for a scheduled afternoon tour. No photos were allowed to be taken. However, we were reminded of our country’s motto: E Pluribus Unum, Latin for, Out of Many, One. We had procured passes from our House Representative that morning to sit in the Galleries of the 116th Congress, but after our tour the legislative bodies were not meeting for some hours. We decided to travel some blocks away to the National Geographic Museum, where an exhibition detailing Jane Goodall’s fascinating life’s work of studying chimpanzees was on display.

Loren and I returned to the Capitol and chose to sit in on the House, who would be voting, starting at 6:30p.m. It was quite interesting to see what we were advised would appear to be chaos, while the voting and business were accomplished. It appeared to be more like a social gathering, with very few representatives sitting in the floor’s chairs. But, we saw visibly how the votes were taken and accounted for, all by a sophisticated electronics system. Maybe someday we can also sit in to see the Senate’s more orderly proceedings in person…

During our short time in Washington, D.C. our car sat parked in the driveway of our AirBnB and we traveled by foot or by Metro everywhere. The next morning we drove from D.C. to nearby Arlington National Cemetary in Virginia, where we saw Taft’s and Kennedy’s graves, and the Tomb of the Unknown Soldier with its continuous Army guard. From there we had an uneventful though long drive to Knoxville, Tennessee, where the weather had threatened to include snow and ice. We were fortunate in that the little snow that had accumulated did not amount to icy conditions and was gone by morning for our next day’s drive.

We then drove through Nashville on our way to Hot Springs, Arkansas. We stopped for me to tour Andrew Jackson’s Hermitage – his home, and its Visitor Center, where I learned more about his life, his terms in the White House as our 7th President, and the state of America during his lifetime. 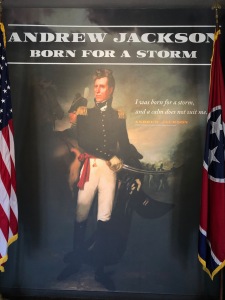 This place holder is for the entries from our original blog to be added, eventually. Please check back – this re-creation is a labor of Love and will take a bit of  t-i-m-e- which, while still traveling, we do not always have a lot available to devote to this.