Dobradan! Pozdrav! Good Day! Greetings! from Croatia, and, Happy Labor Day weekend!! I have to admit we feel more than a bit distanced from that U.S. holiday this year. We were still on the Dalmatian coast of the Adriatic sea in Split at the beginning of this week. One evening there was an extensive sound of fireworks, and, on looking out our window, I made a few photos. Our AirBnB host knew of no reason for the show. Maybe someone knew that Loren and I were having a wedding anniversary this week? Ha Ha Ha! 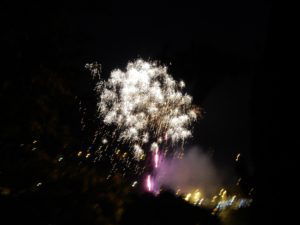 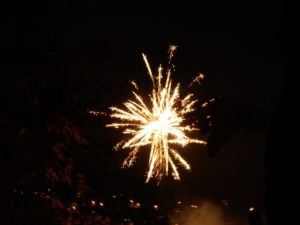 We took another hike on the peninsula and over Mt. Marjan – said Mar-yahn, to Bene – said Behneh, beach, then had lunch including traditional Croatian style smoked-and-wind-dried ham at Lucia’s – pronounced Lucheezia’s restorant – I think you know how this is pronounced, overlooking the beach. We walked more through Diocletian’s open palace with the period staff, and simply relished in what has felt like the most-strung-together days of gorgeous weather of our whole journey, at least in many months. On our third walk to the Split peninsula, we rented bicycles to see more of Mt. Marjan. 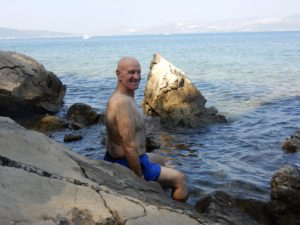 We also attended a second Chamber music gathering at the Split City Muzej – Museum. With both those cozy evenings, and from seeing other recent musical performances, it became more apparent to me how much professional musicians may emphasize their emotion with their facial expressions, and, as if they are dancing with their instruments, through their body movements.
We were up early the next morning for our 7am bus ride of four hours to arrive in Plitvice – said Plit-veet-seh, Lakes. There has been much reconstruction in this area since the time of the former Yugoslavia. The house we are staying in – very near the National Park – is brand new, because, the home that the owner had grown up in on this site – we learned from his daughter who spoke better English, was destroyed during the war. When he rebuilt it, he added enough space to offer rooms for rent. After a walk around the Rastovaca neighborhood, it was plain to see many other homes here are new too. Nearly all have similar looking signs for available rooms, and, they do fill up. At dinner we had a nice conversation with a young British couple who had traveled a year in Asia, at breakfast we met a young couple from Ireland though the wife hailed from Croatia.

We rode a 9:30am bus for about 2 hours to see Zadar. We spent the afternoon at Kolovare beach, where we had natural shade below the trees, for when we weren’t dipping in the refreshing clear water of the Mediterranean. We brought a picnic supper to watch sunset near the Sea Organ. The Sea Organ is the attraction that enticed us to travel here – a set of multi-length pipes architected in such a way that they are “played” by the waves as the tide comes in. The effect produces lyrical sounds that remind me of whale calls. By the way, can you find the Croatian word for chocolate on the cookie package in my photo?

After sunset the Pozdrav Suncu – meaning Greeting to the Sun, a solar powered night light show began, as we enjoyed a pleasant conversation with two families on holiday from Italy. Experiencing these two awesome wonders of the modern world was the highlight of our memorable day in Zadar. With the only bus option that allowed us to see what is referred to as “The best sunset in the world” with leaving Zadar for Plitvice Lakes at 23:00 – 11pm, it was a long day. After midnight on the way back we had one more awesome experience – we acknowledged our 25th wedding anniversary! 9/1/91 to 9/1/16, but who’s counting?

Speaking of wonders, we waited until September 1st for our first day to visit Plitvice Jezera – Lakes, National Park, what my cousin claims as the “8th Natural Wonder of the World,” because, the entrance fees were much less expensive than in August, and, every little bit we can save allows us to travel that little bit longer. And, speaking of September 1st, we enjoyed a lovely dinner at Petra’s, a recommendation by and half-mile walk from our AirBnB home, to celebrate our special anniversary. 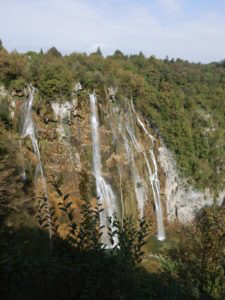 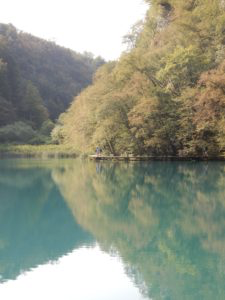 Ok, so I agree, Plitvice Jezera *is* more amazing than Krka Falls. What we saw there in two hours compared to what we have seen here so far in two 6 hour hikes, is incomparable. Here we have seen the most number of waterfalls in one place that we have ever encountered. With warm autumn sunshine, cool mountain breezes, trails to meander, sounds of waterfalls, views of nature, what more could one ask? Well, ok, one could ask for a few less people. We understand 8,000 people were in the park on our second day there, which is only half the number of those who visit in early August. But, still, 8,000 are a few thousand too many! 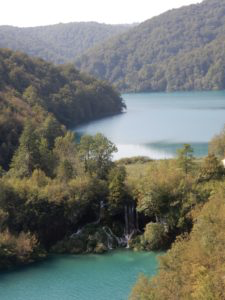 It is hard to picture what this area was like 25 years ago. Hearing from my cousin who wrote how her daughter-in-law had to hide in tunnels for safety before she fled Croatia, and that her paternal grandmother died at the hands of invading troops, helps me imagine maybe just a snapshot of that time. The “Iron Curtain” that delineated east from west had prohibited travel in Eastern Europe for westerners and the western world for most eastern Europeans. This year, our host is seeing more Americans visit than people of other nationalities. As so many Europeans already know, this area is well worth visiting for its exquisite natural beauty. I am grateful that there is now a peace and prosperity here, and feel privileged to spend time seeing the incredible vistas.

PLEASE NOTE: This week we have decent internet coverage, but we may not have service in the countries we are visiting next. Please visit here again, I will share my weekly post when I possibly can. 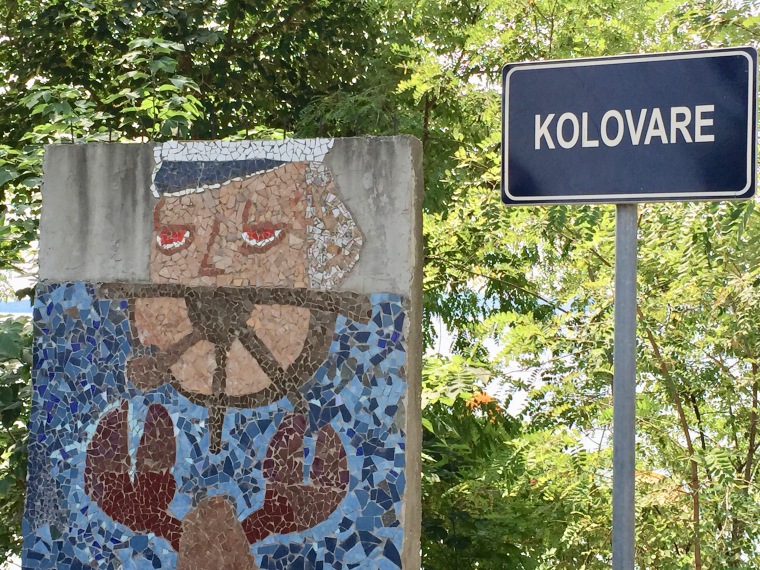