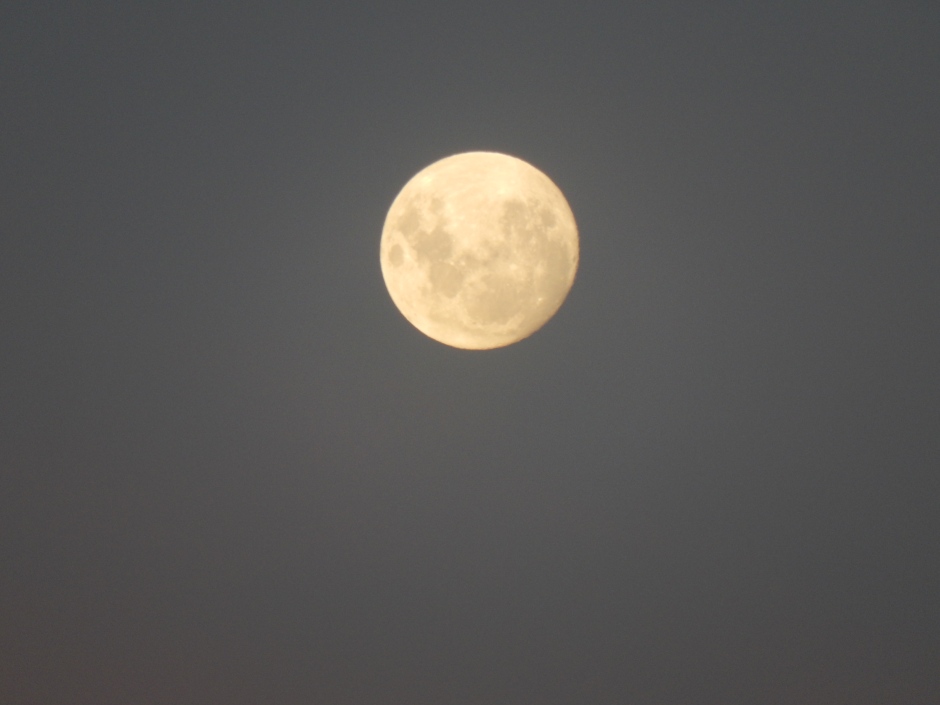 This posting is late, due to a lack of internet in Antarctica… In Ushuaia, Argentina at the start of this week we learned that there is less oxygen at the southern end of the world than we are used to, which causes drowsiness. I had thought my exhaustion was from limited sleep on the plane – surely that contributed as well. We took a day tour of Parque Nacional Tierra del Fuego where we found tundra-like terrain for Upland Geese and Black Neck Swans to thrive. Sadly, we also saw damage done over time from the original 25 pairs of beavers who were imported with the intent for the pelting industry in 1946. However since the weather conditions here preclude viable enough coats and with the lack of predators, there are now over 100,000 beavers, and their dams prevent water from reaching the roots of indigenous trees… a problem still needing to be resolved. 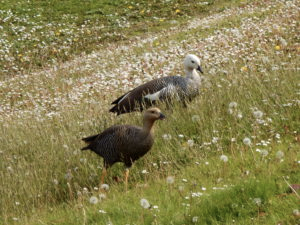 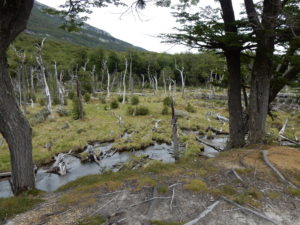 Late in the afternoon we boarded our ship, Ocean Diamond. With 179 passengers and 22 expedition staff, all served by 122 dedicated ship’s crew, dining, and housekeeping, we sailed away through Beagle Channel, having our safety preparedness drills while at sea. 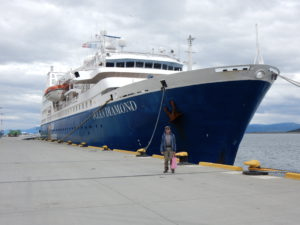 Later, we were fortunate to have an easy time of two days and nights through Drake’s Passage, normally known for its rough waters. The doctor onboard was helpful in our decision to still take dramamine – see my new nickname for this medicine below, another factor in feeling tired. However, I will take tired over seasick any day, as the dining room was noticeably less full the second night at sea.
I was inspired to write this four verse Haiku:
Cruising to Antarctica
by Claire Adalyn Wright
Through the Drake, no way
could I take showers… as our
ship rocks, lifts and dips.
Drunken sailors walk
the halls, sans any liquor
passing through our lips.
Drowsamine pills cause
unavoidable dozing
during helpful talks,
Where expert staff teach
how to stay safe and have fun
in the Antarctics.
The expedition staff included a variety of people knowledgeable in, for example, geology, marine biology, ornithology, photography, and, who entertained us with lectures, activities and photos. Did you know that the continent of Antarctica doubles in size in winter? Not only is it known as the 7th continent, it is also called the White Continent, and, claimed to be the coldest, driest, highest, and windiest. Nearly summer right now, calving glaciers create floating masses of icebergs and ice floes. Here is my best of first photos of an albatross, and my first sighting of an iceberg bigger than a bus… 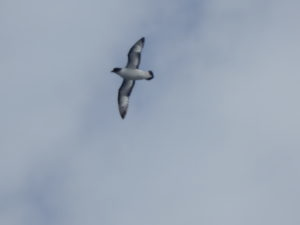 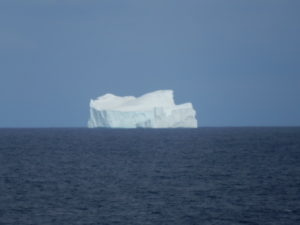 We stopped in calmer seas among the South Shetland Islands. This is where we first disembarked on heavy-duty rafts called Zodiacs. If you look at Antarctica’s geography, there is a finger shaped peninsula aimed at Ushuaia toward which we then sailed. It contains the continuation of the Andes mountains of South America. Sailing around parts of the western side of this peninsula, the waters remained calmer. Sometimes the Zodiac drivers piloted us to an island shore or to the continent to hike, and sometimes they cruised us around the waters. Oftentimes we had both a hike and a cruise per day, and that was usually once in the morning and once in the afternoon. 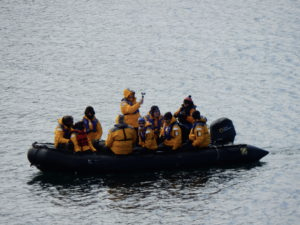 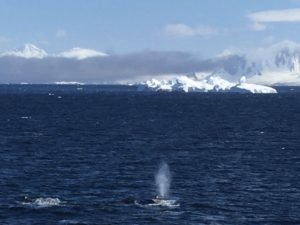 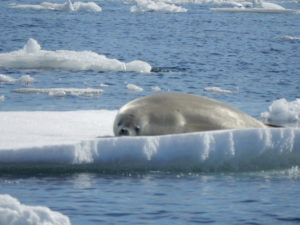 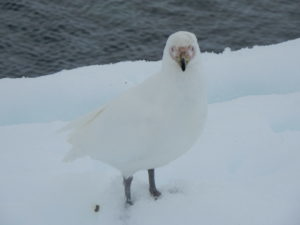 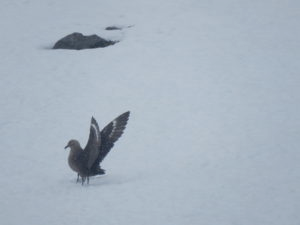 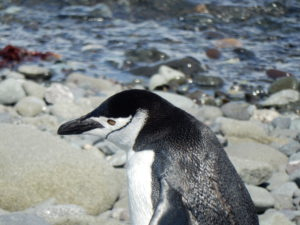 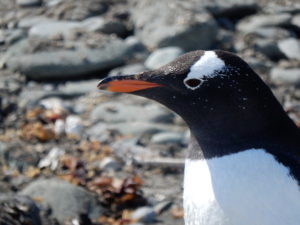 *In the lecture, we heard how this particular Albatross for example has white on its head, that particular Albatross has gray on its head, this one has dots on its wings, that one has stripes on its wings – all very hard to identify from a distance!
As if that were not enough, other events that stand out include snowshoeing; finding new born penguin chicks keeping warm beneath a parent’s body; seeing iridescent rainbow clouds above dense bright white clouds below beautiful blue skies; 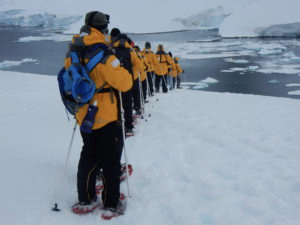 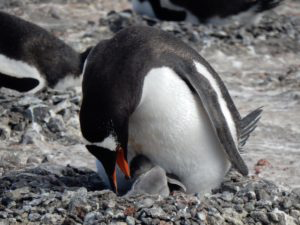 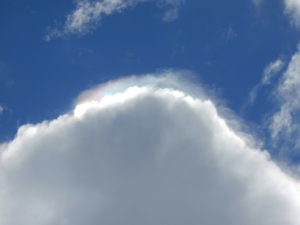 the full moon following us; our ship plow through sea ice; remains of yesteryears – like skeleton boats of the whaling industry; 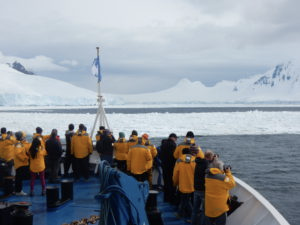 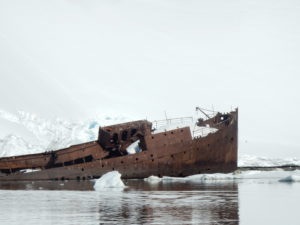 and, the myriad forms of glacial ice. 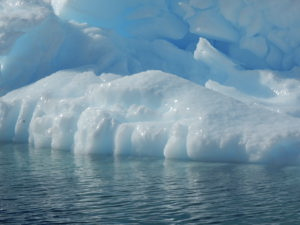 These among other photos that I did not capture include a glacier calving down a partially exposed rocky mountainside as if sand in an hourglass; that Minke whale that swam about a meter – 3 feet, below our Zodiac; an evening BBQ on an outer deck where we bundled up underneath our handmade hats to compete in a contest.
An additional noteworthy experience is the night when sixty of us – plus four staff – camped on the snow. We spread out over a wide berth on Ronge Island to sleep amid the Antarctic sounds: like calving of ice and snow sounding like rifle fire, thunder, or a slushing noise; terns chirping in flight; noisy skua seeming to be jockeying for a partner to sleep beside; then, snow crystals bouncing on our outer layers of protective ground bedding, first gently, then heavily, as the hours of the all-night-light sky ticked by. While two centimeters – more than half an inch, of accumulating snow fell, the vistas morphed from distinctive mountains, glaciers, clouds and dark southern ocean, to simply blended grays and whites. 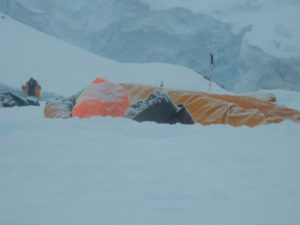 The overnight inspired my most recent Haiku:
Antarctic Outdoor Overnight
by Claire Adalyn Wright
Eternally light
during the night – barely I
slept, for sound and sight.
All along the past two and a half years of our journey, different people have asked if we would visit Antarctica. My answer was always no, little dreaming how much of interest this part of the world was to Loren, and that it would become part of our experience.
Since booking our voyage, some people have asked if we would take Bikram Yoga classes while there, or, wondered if we would spend each night on the ship. There are no settlements on Antarctica, just the very few research stations. Most of those are abandoned and yet to be cleared off per recent inter-country agreements. The one exception we came across was Port Lockroy, an historic British outpost that receives thousands of applications for the meager few staff positions briefly available each summer. Here we were able to mail a few postcards. So, no there are no opportunities to take yoga classes on the 7th continent, and, other than our one night of snow camping, we spent all of our nights onboard the Ocean Diamond.
Returning from the Southern Ocean to the rough to us swells of Drake’s Passage, our walk was step-step-shuffle-shuffle-shuffle. Our sleep was lulled by rocking – except for occasional big thumps, sudden drops, or unexpected rolls, as if airline turbulence. Once again we were fortunate in that most of the time the ship kept up a nice rhythmic pace through the Drake, alternatively feeling like a waterbed, cradle, hammock, or rocking horse, not unlike a breathing-in and breathing-out of the open ocean, reminding me how waves on a beach often feel like the heartbeat of the Earth. We made our return voyage with more informative lectures and fun gatherings, one of which was a photo contest where two of Loren’s photos and one of mine were given Honourable Mention. Loren’s are included his most recent “On the Road…Just Didn’t Know” Photos with Poetry e-blast. 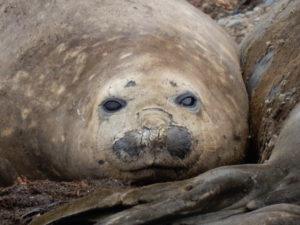 We sailed on, first seeing Cape Horn which straddles the Pacific and Atlantic oceans. We had such an easy time through the Drake that we idled around Cape Horn for hours before sailing overnight through Beagle Channel to Ushuaia. I am so very appreciative for the opportunity to have traveled on this exceptional, otherworldly excursion. Now in the Buenos Aires area since late last evening, I am still feeling as if my body is being gently lulled and rocked as I stand, walk, or sit.
We wish you Merry Christmas! Happy Hanukkah!