We were in Austin at the beginning of this week. As it is the Capitol city of Texas, and as we were in the downtown area, we paid a visit to the Capitol building. Here we learned a little more about the history of Texas. After it was part of Spain, it was part of France, then part of Mexico, then – yes there’s more – it was an independent colony of Mexico, before it became the 28th state to join the Union. Being an independent colony explains further what an AirBnB host had told us: since Texas was once its own country – a Republic – Texans are allowed to fly the state flag at the same height as the US flag. Texas was also part of the Confederate states after joining the union, but we learned that Governor Sam Houston was resistant to both sides of the Civil War, which then cost him his job. With all that history, the Capital proudly displays all 6 state seals. 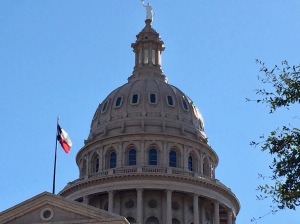 We again enjoyed eating – here we had various tacos, a BBQ dinner, sushi… It was still quite unusually cold for in Texas winter – that is frost on our windshield one morning. We stayed one night at a hostel that was opened by a travel blogger who Loren follows. Unfortunately he was not in town. We attended a UU Sunday service, and, we had a little more exercise this week with daily Bikram yoga classes. I had the delight to catch up with a Bikram Yoga Teacher Training Littermate, here! And, we enjoyed an evening walk at Zilker park where we captured the skyline in the nearing of twilight. 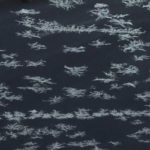 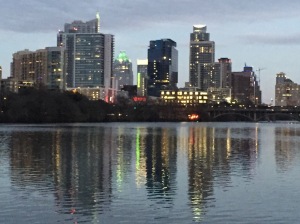 It is true, Texans do things BIG… aside from the state itself being second only to Alaska in size, our first AirBnB in Fort Worth was in a big HOUSE, our AirBnB in Austin had big bed PILLOWS and big fluffy TOWELS, and, we saw big trailer loads of COTTON being harvested west of Austin, – in my photo, that is one “bale” with a huge tarp over it; and *at least* tens of square miles of WINDMILL farms, for example. I just had to stop by the side of the road to touch a puff of escaped cotton, many of which could be seen all over – there is a little seed inside, surrounded by soft cotton. On further thought, Loren and I might be more Texan than we thought – after all, we are on on a big 146 WEEKS of journeying, so far! 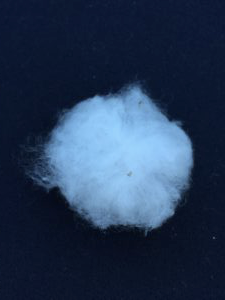 Along our 12 hour drive to Santa Fe, New Mexico from Texas, we saw a few more than the usual number of hawks. Their flying closer to our car allowed us to see them better. Then there was the beautiful male pheasant right beside the road. And, we can attest that Canadian geese end up in the south, as we saw so many here, with one pond absolutely teeming with them as we drove by. Unfortunately we were unable to capture snapshots of any of these. Please take my word, the images are indelibly anchored in my memory.
[Update from a week later: I was able to make a couple of photos of hawks in the desert near Tecopa Hot Springs.} 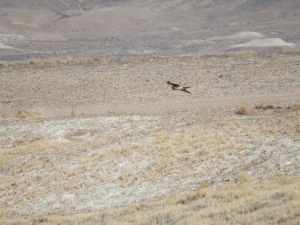 To sum up Santa Fe for us in a word? It would have to be smitten! For example, we were thoroughly inspired at the Georgia O’Keeffe Museum. Her life story is impressive – she too was smitten with New Mexico. We learned that her style of art is known as “imaginative… grounded in personal expression and harmonious design” leading “to an interpretation of the natural world, not a representation of it,” as she learned from studying art at the University of Virginia.

Santa Fe happens to be the Capitol of New Mexico. Similar to how we visited the Capitol building in Austin, we stopped in at the one in Santa Fe too. Inside the building, most of its hallway walls are covered with impressive and inspiring galleries of art. Additionally most of the homes and buildings around Santa Fe are of the one story adobe style architecture, and some of them are gaily painted or decorated as well. Fun! 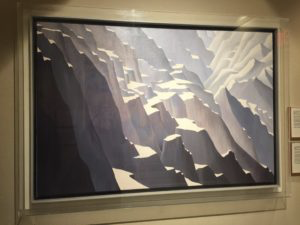 We enjoyed taking more daily Bikram Yoga classes here, and, we found a couple of meaningful weekday activities in which to participate at the local Unitarian Universalist Congregation too. It is wonderful when we find a place that is home to a Bikram Yoga studio and a UU congregation. But we only had time to just whet our appetites for the locale – wide open spaces with fringe mountains nearby… Ahh!

We also hiked at Kasha-Katuwe Tent Rocks National Monument. Kasha-Katuwe, translated from the Native American name, means White Cliffs. The only other place in the world where you can find such similar geological formations is in Cappadocia, Turkey. In a word, they are gorgeous!

[Another update from a week later: I think these unique formations highly influenced the Sufi meditative dance practice of Whirling Dervishes, especially based on this image I found at the small public Library in Tecopa Hot Springs. What do you think?]

Today we will be driving 10 hours to stay a couple of nights in southern California… When we had first arrived at our AirBnB in Santa Fe, we found a pair of fun eyewear. I believe it is still a fine time to wish you a Happy, Healthy, and Most Meaningful 2017!