This week has been one of  torrential rains, dropping an incredible amount of rain… and on the bright side making the growing things very green! We were fortunate to have clear skies when we drove south to Connecticut to visit cousins. The elder generation are now settled comfortably in assisted living, but, sadly, for the first time they were challenged to recall who we are, other than recalling their age cousin, Loren’s father.

We had a lovely visit with the cousin our age, their daughter, and stayed overnight in her newly reclaimed and gaily redecorated guest room. Loren even had a swim in the Atlantic ocean while we were there. 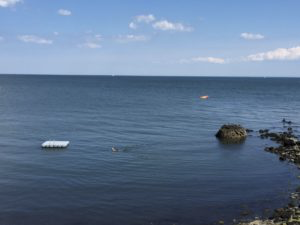 On July 4th Loren and I enjoyed being back at and on the lake in New York – first in our family’s paddleboat, then in their row boat. Maybe before we leave here we will have tried their standup paddle boat too. We were also entertained by booming and sparkling of fireworks displays around the lake, which occurred on many evenings this week. 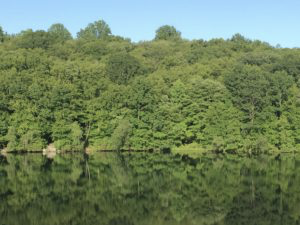 One day we had a leisurely lunch with a dear friend at a P.F. Chang’s, but where was my camera? When Loren and I returned to the lake I neglected to heed my brother and sister-in-law’s warnings and pruned back some of the vines that threatened to overtake the Pfitzer Junipers. However, I am now paying dearly for my indiscretion as I now have an extreme reaction on my right forearm to the poison ivy I encountered that they had told me was lurking there. It has been too many years since my last encounters with poison oak in California, and with poison ivy in New York many, many years before that, so this is a painful reminder that skin irritants can create such discomfort. I will spare you a photo, but think I will need to invest in some Benadryl and Calamine lotion so that I can sleep better tonight.

One morning I went to visit the Mausoleum which is the final resting place of my great-grandparents and a great uncle and aunt. On my way there though I had to pull over to capture photos of two unexpected but inspirational signposts. I later learned that they mark a neighborhood of 26 streets named for famed poets like Keats, and, Longfellow.

My great-grandmother Maude lived to be 100, I had the immense privilege to know her until I was 12 years old. Her only son, my grandmother’s brother was just shy of 100 when he died. I was impressed to learn that there are numerous famous people and their spouses laid to rest in this Cemetary too, for example Ed Sullivan, Joan Crawford, and Malcolm X, among others. Judy Garland was once here before being removed to California, and, Yul Brynner, John Lennon, Christopher Reeve, and Nelson Rockefeller, among other celebrities, were all cremated at this facility. 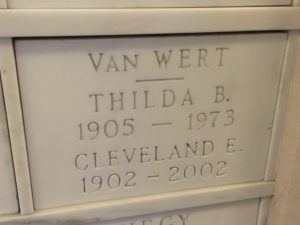 Some of the inside walls are decorated with remembrances of what the Cemetary directors see as “individuals whose contribution to humanity will be remembered until the end of time.” I found them also inspiring.

Otherwise, here in New York and one morning while in Connecticut Loren and I have taken Bikram Yoga classes, in between making travel plans for our next 3 months, while also taking care of routine car maintenance. We are staying indoors from the humidity, intermittent rain, thunder and lightening storms, and enjoying walks during periods of sunshine and comfortable days. I found this inspiring image on a neighbor’s trash pile. 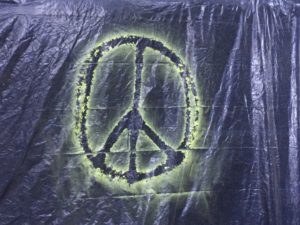