I have had one foot in family genealogy this week, the other foot in packing and preparing to again leave the United States. It has been a very full week. Loren and I took a break from packing to see part of a Bruce Springsteen tribute band concert in a local park while we were still in New York. We arrived to find little parking, but a policeman I asked who was standing near several cars parked near “No Parking” signs said they were “Overlooking the signs for a couple of hours, so long as cars are not blocking traffic.” “Great,” I thought. We spent less than an hour enjoying our picnic dinner, only to find a ticket on our car when we left! We decided to stop in at Police HQ to complain, and, later that evening the officer called to say that he had ripped up his copy of the ticket. Nice!

Our final errands included having Flu shots… thanks to my cousin who insisted we should have them. Have you had yours this year? We read this in an email from an MD: “Patients who don’t get the flu vaccine have more heart attacks, strokes, and other serious illnesses.” That said, the wildlife we saw in New York included: bat, muskrat, and wild turkey. I must mention how Loren was keenly aware of the multitude of cicada singing and cricket chirping – pointing out sounds I rarely notice for their continual background presence throughout my childhood. Farewell, New York, for now. 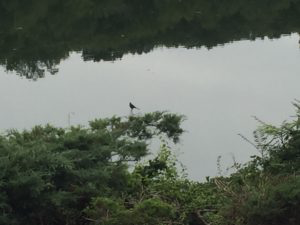 After a last evening with my brother and his family, we rode in an Uber taxi to JFK airport. Here we found our packing work had paid off: Loren’s checked backpack was an allowable 21kg, while mine was just 18kg – less than 50 and 40 lbs respectively. I was grateful for the onboard movies as I could not sleep on the overnight flight. I enjoyed United Kingdom and Wild. I highly recommend them both! A gorgeous Mediterranean day greeted us at the edge of Lisbon, Portugal. From the airport we took a bus to walking distance to our AirBnB – which is coincidentally off Rua de Sao Jose – San Jose Street.

We checked in, then quickly walked the several blocks to arrive just in time for our scheduled e-bike tour. Lisbon is similar to San Francisco in that it is near the ocean and hilly in parts. It was my first electric bike ride. It was dangerous -only- in that I would like to have my own e-bike when we return home. The appeal is for the boost it has for climbing hills. On our outing, guides Yann and Philippe took us and four fun young adult Persians who now live in London, to our first miradouro – terrace with a view: Senhora-do-Monte. We also rode up and down through the very, very narrow streets of Alfama – the oldest section – meaning neighborhood, because it survived the 1755 earthquake, and resultant fires and tsunami. We also saw other less noteworthy sites of their Lisboa. 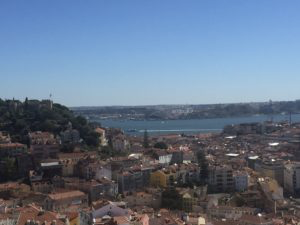 Loren pre-booked several outings for us to start off being in Europe again. The next day we took a Walk, Food and Wine Tastings tour. I learned so much more, and spent the good part of a day with another great group of people. I especially learned from our guide Pedro (said P-eh-dro, not the usual Pay-dro, or P-a-dro), about the Carnation Revolution, Portugal’s recent nearly completely nonviolent coup to end the longest dictatorship of the twentieth century. The event is memorialized by the 25th of April bridge, designed like San Francisco’s Golden Gate because of its ability to withstand ‘quakes. I was also introduced to The Lusiads, an epic poem of Luiz de Camoes to celebrate Vasco de Gama’s discovery of a sailing route to India. And, we learned that Nossa – meaning, to us, or, Saúde – health, are the ways to toast our Portuguese drinks. 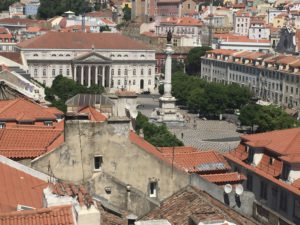 Over the course of a few hours we had the equivalent of a progressive meal – beginning with tasting Portuguese coffee. Fortunately a dear cousin’s friend had warned us of the strong espresso and pointed us to a lighter alternative called Galone. This we had with the bakery’s best pastry. We also tasted Ginjinha – Cherry Port, served with “Romeo and Juliet” which a square of white cheddar-like cheese topped with a square of cheerful marmalade made of quince fruit, which provided a delectable sweet and savory complement to the wine. Later we enjoyed a glass of Bohemia – an historical beer. We finished with a glass of champagne to go with dishes of shrimp and tasty beans.

That evening, Loren and I saw a Fado performance. The advert describes it this way: “Fado is Portuguese and was born in Lisbon. A symbol of the nation, it tells stories of the sea, the people and nostalgia.” Another quote, more melancholy, that was displayed during the performance by Domingos Goncalves Castro also touched us:

You ask me the meaning of
Nostalgia, to you I say
Nostalgia is what is left
When all has passed away.
The next day we had a tour to Sintra, which we already knew had mixed reviews: Lord Byron in the 18th century wrote that the town was, “Perhaps in every respect the most delightful in Europe.” Maybe that was the case then. A friend of ours who visited more recently suggested it is, “Crowded with tourist buses, warnings about pick pockets, and very noisy.” I think our experience was in between those two reports, and, again we had a lovely group of co-travelers with our competent and very knowledgeable guide, Filipa escorting and educating us. We first visited Parque Pena to see the elaborate castle there. Then, we walked through Quinta do Regaleira – I wish my grandfather had been there, as it is full of Freemasonry symbols, and included an “Initiation Well.” 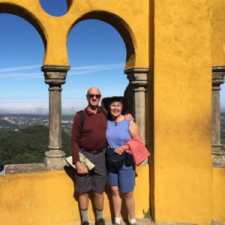 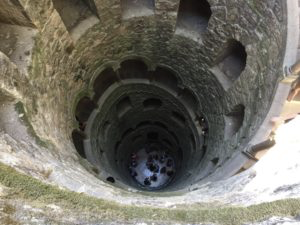 We also stopped at Capo da Roca, where the R in the Portuguese language is pronounced much more like an H, to see the westernmost point on continental Europe. Last, we were at Cascais, (said Cash-case) to soak up a walk along the beach with gelato. Loren and I later finished our day with pork ribs that simply melted in our mouths and Bacalau – a type of cod found only in these Portuguese waters. To conclude our week, Loren and I rode a tram to nearby Belém to see the magnificent Jerónimos Mosteiro – Monastery. 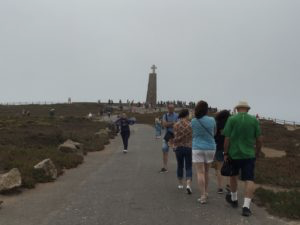 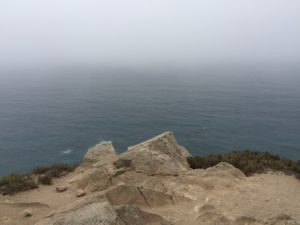 Afterwards, we had a snack of famous custard pastry that a friend had suggested we try, at Pasteis de Belem. And, after that, we saw the Tower of Belém, for another miradouro.

Sadly our guitar concerto at a church that evening was canceled due to a car accident, so we hope to go tomorrow instead. Our trip to the cathedral was not all in vain as we saw two different memorable views of the setting sun over the 25th of April bridge. 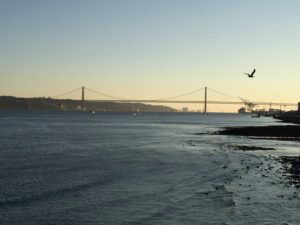 I have enjoyed hearing the calls of what must be a neighbor’s exotic bird – our AirBnB apartment butts up against buildings on either side, and our windows and outside patio are very close to the neighboring buildings on the opposite side of a quite narrow street. So, the echoes of muffled conversation and other sounds are quite delightful and entertaining – except when dogs fight or a neighbor has a party, like was the case this past Friday night. Wishing you Boa Noite – Good Night, for now!