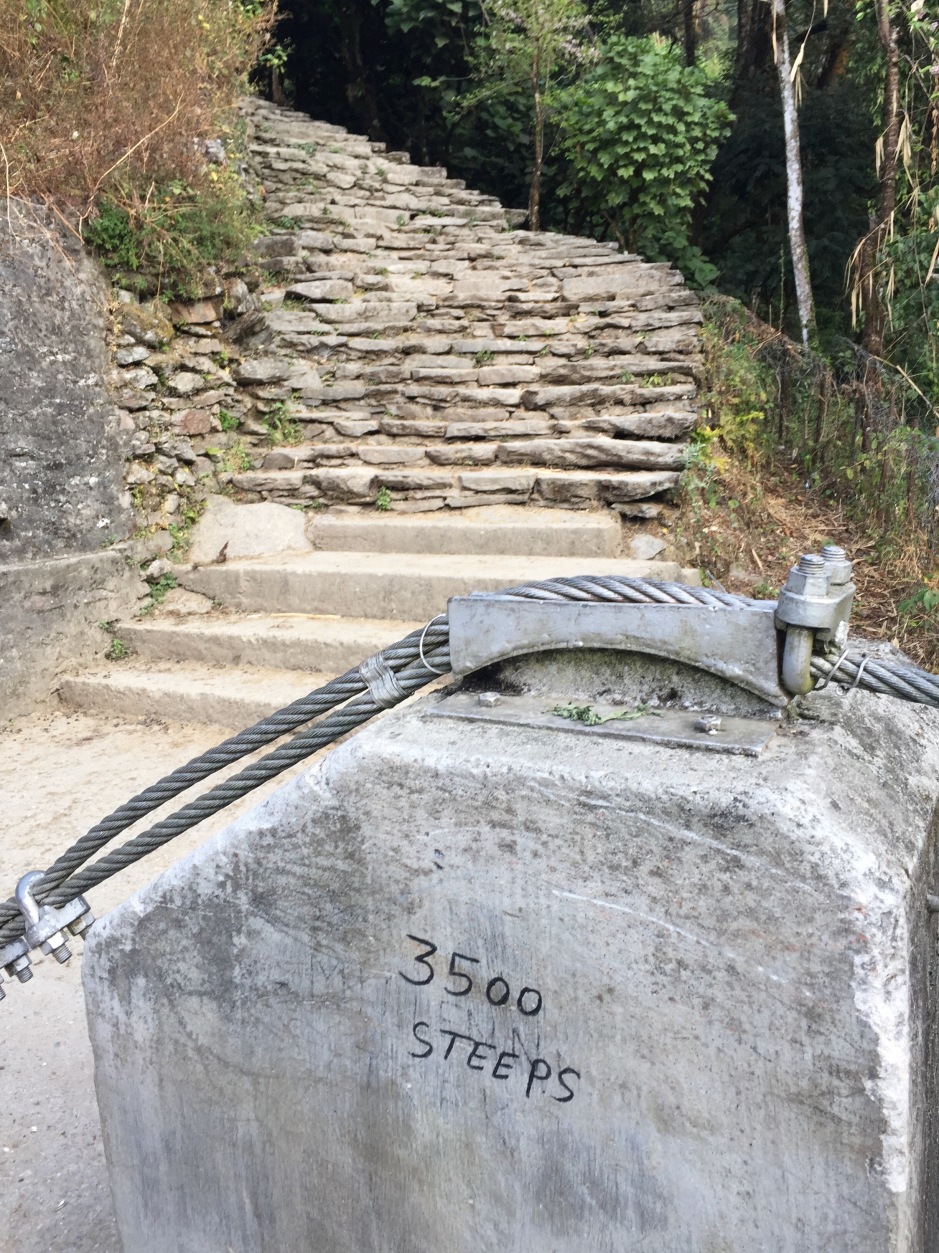 Dear Dear Ones, Loren and I hope to all who celebrated Thanksgiving that you had a delicious, fun and wonderful one! A sad piece of news this week is that my Godmother has died, at 95 years of age. I am extremely grateful that we were able to visit with her recently in Florida – twice – since we left home in April, 2014.

This week Loren and I went on a Trek to Poon Hill, in the Annapurna Range of the Himalaya. We only carried what belongings we needed and left the rest at our AirBnB in Pokhara. I smiled in recognition at remembering the old George Carlson comedy routine about “Stuff,” as we pared down just what to take and what to leave…

With our expert guide, Dil, we drove in a Tourist van from Pokhara at 2,690 feet to our starting off by foot point of Naya Pul village at 3,317 feet. The village name is also spelled Nayapool – names change from maps to guide books to sign posts, likely because the Latin alphabet is so different from the Nepalese scripts. The roads our van traversed varied too – from smoothly paved to deeply gouged dusty dirt or rock, as well as having sections ravaged by mudslides from prior monsoons. I now understand part of what causes Nepal’s steep terrain. Our driver was adept at navigating it all, along with the other varieties of oncoming, passing or slower vehicular traffic on understandably narrow highways. He stopped once for us to take a photo of our favorite Machapuchhre, nicknamed Fishtail for one angle of its appearance.

The best advice I read about trekking in Nepal was, “Look when you look, walk when you walk,” another valuable mantra for life in general, and, “Stay on the uphill side when passing yak or buffalo for safety,” because a misstep on certain parts of the trails can be treacherous. As a dear friend warned, “the Himalayas are not the California Sierras.”

Here is what a guide book said about our Poon Hill trek [with my added comments]:

“Ghorepani: in the Annapurna region near Pokhara [between Greater Himalaya
and Mahabharat – Lesser Himalaya ranges]. Probably Nepal’s most famous short
hike, to the picturesque village of Ghandruk, via one of the most unforgettable views
in the Himalayas. Considered fairly easy [my emphasis], there’s a steep climb on
day two of 3,381 stone steps. … Ascend through forests of rhododendrons [trees not
bushes, unfortunately not in bloom in November; much bamboo grows here too] and
rice paddies [or winter wheat fields]. The highlight of the trek is the view from Poon
Hill [Pun Hill, Poonhill] at 3,210m [10,531 ft] of the world’s most famous peaks in one
magnificent panorama. These include Dhaulagiri, [Varaha Shikkar “Twelve Peaks,”
not Annapurna I] and Annapurna South, often the best view in the Himalayas.”

Here is another description to give you some ideas about our week:

Perfectly suited to beginners and families. One of the easier [my emphasis again]
treks, packs a major punch when it comes to views. The sunrise over the rugged
Annapurna Himalaya range is thought to be one of the best in the world. As you ascend
into the hills, the scenery is constantly changing from lush forests, to arid terrain, to
farming fiends. Lovely family-run teahouses are dotted along the route, there’s no need
to carry camping gear. After a fairly steep [me again] climb to the top of Poon Hill,
you’ll be rewarded with one of the best mountain vistas on earth.

We stayed overnight in these 6 villages: Tikhe Dhunga (Tikhedhungga, Tikhedhunga) at 5,050 feet; Banthanti at 7,250 feet (this is not to be confused with Ban Thanti that we later hiked through at 10,433 feet, but, since Ban Thanti means “in the forest” there are likely more villages with this name in Nepal); Ghorepani (GhoRepani) at 9,380 feet; Tadapani, translated literally means “hot water” at 8,625 feet – and not the similar named Tatopani; Ghandruk at 8,530 feet; and, Syauli Bajar (Syauli Bazar, Syauli Bazaar, even Syaulibazar) at 4,560 feet. We changed our original itinerary before we left to include spending the second night at Banthanti to allow ourselves to acclimate by 2,000 feet each over three days, instead of 2,000 then 4,000 feet over two days. 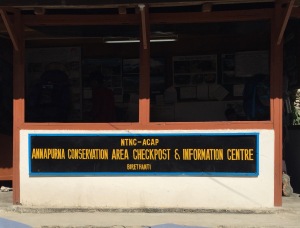 One highlight was when we walked those continuously steep stone steps up, up, up from Tikhe Dhunga to Ulleri (Ullery). I have found counts of the steps tallied anywhere from 3,200+ to 3,700+ and believe the discrepancy is because the choice of which irregular “step” to count when planting the next foot, whether short stone or taller rock. Dil, by the way, is 25 years old and has worked first as a Porter then a Trekking Guide for the past 10 years. 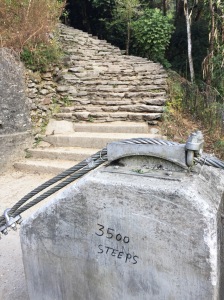 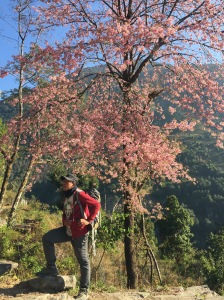 The major highlight included climbing from Ghorepani in the wee hours – because I am a perpetually slow uphill hiker, to Summit Poon Hill. I just have to stop, frequently, to catch my breath on the ukaali, uphill, never mind altitude. We were most fortunate to witness a gorgeous sunrise over the vast view of the Annapurna range – early Dhaulagiri on the left below, a little later Annapurna South on the right being the two most prominent. In fact, every day we had gorgeous weather of blue sky with only some scattered clouds, allowing for great views throughout. And speaking of altitude, fortunately our extent of sickness was mild headaches, lightheadedness for Loren, and mild feelings of nausea for me. Paracetamol (Tylenol) was helpful as we ascended. 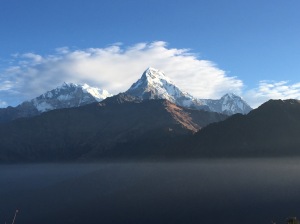 Our plans had included to go from Tadapani to Jhinu Danda (Jhinudanda) at 5,840 feet, then to Tolka (Tolga) at 5,575 feet. The highlight would have been hiking down to Modi Khola (Modi River) for a soak in the Jhinu hot springs and back up. Unfortunately, from Poon Hill through to Tadapani entailed so many steep, stone steps that Loren’s high school basketball knee injuries flared up, requiring a change in the route. Both my uphill pace and Loren’s knees forced us to learn too well the Nepali word, bistari, for “slowly, slowly,” reminding me of the “piano, piano” I learned in the Italian Dolomite. Instead, we saw the river from above.

To our fortune we spent a lovely Thanksgiving at Ghandruk, where we met our newest travel friend, from Seattle. She and I each enjoyed a bowl of soup, Loren had roast chicken – the item closest to turkey on the menu, while Dil ate traditional dal bhat – lentils with rice. Our conversations before, during, and after the meal were meaningful. In the morning I remembered to take our photo, with Annapurna South and Hiunchuli in the background. I am thankful that we were on a “fairly easy” trek – not how we would describe it, but we are not in the shape we would like to be either. I feel fortunate for the magnificent views in person, on our own power, and from trekking in the Himalayas. We had a few stray dogs join us, saw herds of sheep on the trails, more buffalo than cow and a few oxen in the fields, and, we encountered several mule trains.

We learned that the Nepalese call what we would call a “mountain,” a “hill” if it has no snow, and, only a mountain over 5000 meters (16,000 feet) is called a “peak.” Years ago, when Loren and I had both read Jon Krakauer’s gripping Into Thin Air account of a disaster on Mount Everest in 1996, we began dreaming of hiking, excuse me, trekking to Base Camp, or at least on the Annapurna Trail. Now we are happy to have trekked a shorter – in both height and duration, part of the Annapurna Circuit, as the entire thing seems to us better left to those of younger years.

We did not reach high enough elevation to see yak, and, no, we did not see any Yeti (Abominable Snowmen). Dil first said, “There are no more,” then a moment later, “They are hard to see,” when I asked. I wonder – are they like dragons, elves, fairies, giants, leprechauns, mermaids, nymphs, pixies, trolls, unicorns, wizards, or other such legendary characters? Or is this creature so rare, like the claims of Big Foot or Nessie sightings, seem to imply? Or, is it real, like rainbows, shooting stars, and snow for those who have never seen them? It is written that the father of Tenzing Norgay – Sherpa to Sir Edmund Hillary who together first summited Mount Everest – had seen one. Some believe, others are skeptical, what do you think? I will leave you with a Sanskrit proverb: “A hundred divine epochs would not suffice to describe all the marvels of the Himalaya.” 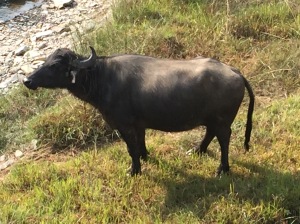 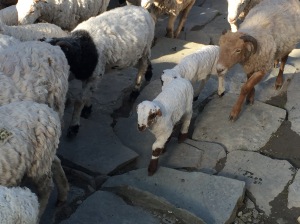 I have not yet mentioned a common sight of men, women even youth in the Annapurna region, Pokhara and Kathmandu, carrying unbelievable amounts of weight, in large baskets or bundles on their backs, using their forehead to support the weight. Many of them work as porters. 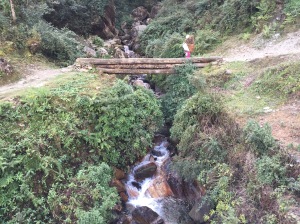 It was interesting too how there are very few mirrors in the mountain, excuse me again, hill villages – and I mean simply one community mirror over the shared sink or in a dining hall or courtyard at our guest houses. Maybe that is why my taking a picture of a local and showing it to them brought delight to see their image.

Sadly just like in parts of Africa, empty plastic water bottles, plastic bags, potato chip bags, candy wrappers, lone flip flops, piles of glass bottles and other items of western waste, some stray, some in foul smelling mounds… There is no “away” to throw these things. The good news is that beginning at the base of the “3,500 STEEPS,” a Sanctuary Committee now mandates teahouses and guesthouses to sell only safe water from large vessels and not by individual plastic bottles. How I wish that were applied worldwide! And, unlike Africa, the free range chickens are very healthy in Nepal.

On a brighter note, we have noticed youth playing badminton, volleyball, or soccer in the cleared off rice paddies, and, everywhere cherry trees, marigolds and poinsettias were in bloom. We ended our week with our AirBnB Homestay friends in Pokhara for a couple more nights. The great news is that Loren’s knee is already feeling a good bit better! 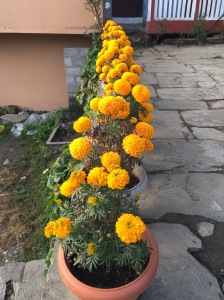 This week too we received news from a generous friend who has hosted our blog from California, that his site had been thoroughly hacked on Thanksgiving day. Further, he had to “Park” our blog, used an image of a sleepy kitten falling awake, and, making it unavailable for us or others to access. It was a great sadness for us, and, a big mess for him. I must say that while my concern has been for the stability of electrical power and internet in some lesser developed countries on our Journey, I had not foreseen the disruptive potential of hackers. As Loren often says, “No one was hurt, no one died,” which always helps to put things in perspective. Meanwhile I continued collecting my weekly thoughts and memories. With the kind advice of other friends, creating this new blog had afforded us an opportunity to reminisce. We hope you too might enjoy the results of our efforts!