It is summer in Aotearoa – New Zealand, in Maori, pronounced ow-ah-tea-ah-row-ah. With us being from California, our experience is different from what we are finding here, especially Loren who is a California native. Instead it often feels more like my native New York for the clouds, thunder, lightning, rain, humidity. Our backpacker motel owner calls rain “liquid sunshine.” Unlike New York, the temperature cools in the evening, more like California. It just does not pay to have expectations – this is summertime in Aotearoa!

Still in Paihia on the Bay of Islands towards the north end of New Zealand’s North Island, Loren and I began this week with hiring a water taxi for transport to Deep Water Cove. Our driver – or maybe you would say pilot? or captain? – after acquainting us with his company, Wai Not – sounds like why not, with wai meaning water, and of safety on the boat, spoke a while in Maori which included singing a short song. He said that basically meant, “Hello!” and that the song part was a tradition of welcome. He asked us – being his only passengers, for a song in return. We were stumped in the moment to think of one, so he prompted that he likes Michael Jackson from the US. I came up with mostly humming part of MJ’s version of Turner and Parsons’ Smile, which he appreciated.

We also learned from him that there are 139 islands in this bay. And, he explained “The Polynesian Triangle” as Maori people are originally of Polynesia heritage before settling on New Zealand. Loren and I discovered that we actually have been to two thirds of its boundaries, as we have visited Hawaii previously and now New Zealand. Sometime we hope to complete the triangle by traveling to the third point, which is Easter Island.

From Deep Water Cove Loren and I made what we thought would be a mild “2.5 hour walk”  for an overnight stay at the Cape Brett Lighthouse hut. In fact the writeup said, “Walk to the hut via the undulating Cape Brett Track,” “through native and regenerating bush” with “dramatic coastal views.” However, we must have overlooked the parts that included, “The Cape Brett Track traverses rugged terrain” and other menacing phrasing, for it took us 4 hours over the steep up and down over several narrow ridges. We made it though, and spent the night in dorm style accommodation with nice people – 2 young women from Auckland, a young Canadian couple and a young man from Wisconsin. We made the return hike to the Cove in just slightly less than 4 hours, and even enjoyed the tramping after the fact. As Loren says, we collected another memorable experience. 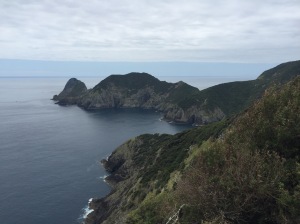 We had a final full day of sightseeing at Bay of Islands: first with viewing Rainbow Falls, then a short walk through a lovely Kaori rainforest, and, stopping to see Haruru Falls. We spent the rest of that day at Waitangi Treaty Grounds, where we learned more of how the Maori chiefs and British crown representatives forged an agreement of partnership in 1840. We had a guided tour, saw a cultural performance and a Maori concert, and, ate a traditional Hangi dinner. A Hangi seems similar to an Hawaiian Luau. And some Maori words seem strikingly similar to Native American words. I marvel at that coincidence. 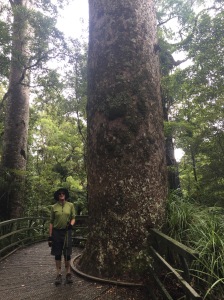 We then drove south through Auckland on our way to Rotorua – said row-tow-rue-ah, on the Bay of Plenty, actually a bight. I am learning a bit about different coastal landforms with all the shorelines of New Zealand. I grew up near Long Island Sound, but now have realized that I had no idea what characteristics make up the category of a sound. Here is a sound-bight of what I have found:

a bay has a wide mouth, partly surrounded by land on three sides
a bight is a shallow curve but less curvature than a bay or a sound
a cape extends far into a body of water with water on two sides
a cove is a sheltered, small inlet, often found in a larger bay
an estuary is where a river meets the sea forming brackish water
a fiord is a narrow, long, steep-sided valley created by a glacier, filled with water
a peninsula is bordered by water on three sides
a sound is a large inlet wider than a fjord, and often separates land from an island

Now I am curious about the name Bay instead of Bight of Plenty? And, Long Island by the way, was deemed by the US Supreme Court in 1985 to be not an island, but a peninsula!

We stopped after Auckland on our continued way to Rotorua for an inspiring tour of Hobbiton, the enchanting place where Lord of the Rings and The Hobbit Trilogies were filmed. We later wanted to walk around some of Lake Rotorua, and drove to where we happened to find a tribute to John Lennon’s Imagine, but, it was dreary and overcast, too blustery to enjoy the evening out and about in the elements.

Another full day was spent starting with a morning at Wai O Tapu – meaning sacred waters, a geothermal adventure. Our time included viewing the Old Faithful-like Lady Knox geyser and some outstanding colorful pools, caves, and geysers. It all reminded both Loren and me of our respective visits to Yellowstone National Park 43 and 45 years ago. Loren’s shirt that day and his hiking poles matched one pool named “Devil’s Bath.” What was also intriguing here were the mud pools. I think everyone who witnessed their frequent quick unpredictable “Bloop!” – what Loren called the audible shows they make, could not help but smile. 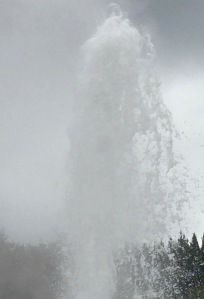 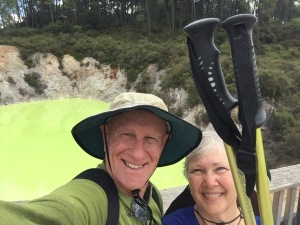 We spent that afternoon at two lakes. Okareka – Lake of Sweet Food, was serene and featured a multitude of black swans. Tikitapu – Blue Lake, being a haven for swimmers, suited Loren to jump in. We finished the day with an evening spa at Waikite Valley, which translates to clear water. As my name, Claire also means clear, I would like to take the Maori name, Kite – said key-teh. We also took an “eco-walk” to see 40-50 gushing liters of boiling water per second, so hot that it must be cooled before entering any of their six pools. The steam combined with the sunlight made for an interesting photo.

Before leaving Rotorua, we stopped briefly at Government Gardens. It was nice to see a bit of Maori history honored with displays, a nice surprise to find folks playing croquet on the lawns, and nice to enjoy a vast array of blooms.

We then stopped to see Waikato River’s Huka Falls, which reminded me of a favorite color of mine as a child – Sea-Foam-Green. Given that this day my shirt matched the waters, perhaps it still is a favorite color.

From here we drove to see Taupo Lake where we enjoyed a walk on an old wharf before arriving at our AirBnB accommodation in a barn with upstairs living space. Our host joined us for a glass of wine and we learned that the name she chose for her retreat -Rangimarie, means place of peace. We enjoyed a peaceful down day staying out of the heavy-at-times-rain, listening to the pattering and pouring on the roof all day long in her delightful lodging. That evening we shared conversation and dinner in her lovely home.

The next day we were back on the go, with Loren taking a 3 hour “glow worm” cave tour by inner tube in a wet suit, while I took tours by foot and boat during the same time to see the unusual creatures. Afterwards together we hiked to see more caves in the Waitomo area – meaning hole made by water. Then we visited a nearby natural bridge. 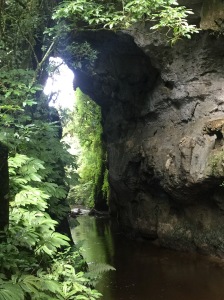 We were fortunate in the timing of low tide at the harbor where we were able to dig in the sand and have a soak in a natural hot pool. That is me standing where Loren would soon dig. Another wonderful week, full of fulfillment. We are so grateful for our Journey, for our family and friends who support us by keeping in touch as best we can, for all the wonderful people we are meeting, and for all that we are learning, seeing and doing. We finished the day and this week with a dinner of locally acclaimed fish ‘n’ chips. Good fun! 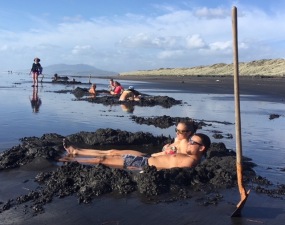 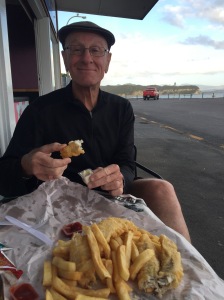