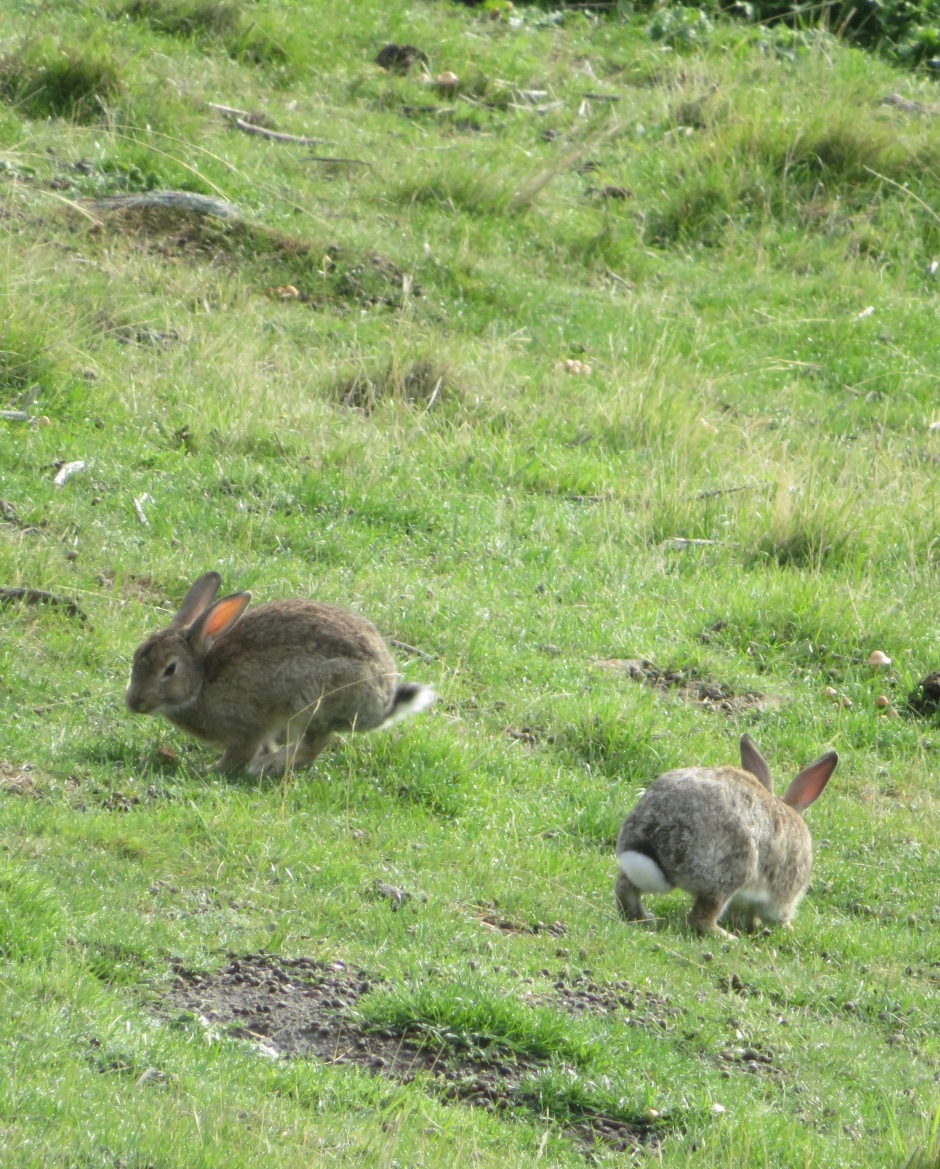 Happy Easter! It is a bit strange for us to not also want to say Happy Spring because, in New Zealand, we should say Happy Autumn. However the playful bunnies we saw on Roys Peak might lead one to believe differently.

It finally stopped raining enough in Wanaka earlier this week for Loren and I to take a couple of short hikes – one to the Blue Pools, and on our way back we walked along part of Hawea River Track. We also stopped to see That Wanaka Tree – well, we thought we had found it from our Google maps, though what we saw was actually two, unmarked, remarkable for their size, evergreen trees. That is Loren standing to the left of them. 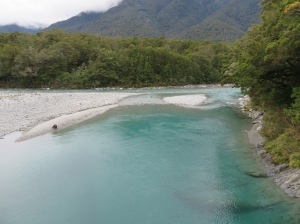 We awoke to our first glorious sunshine and partial blue skies peeking through the remaining clouds and fog in what had seemed to be a long time. This was the day that we had planned to attempt the 6 hour Roys Peak Track. Loren has remarked several times how much this area reminds him of Scotland. As we began to hike, the clouds re-amassed leaving scant blue sky to be seen. Reaching the misty fog-line after nearly 2 hours of trudging up, up, and up, I called it quits. Still, I had had some fabulous views of the area. 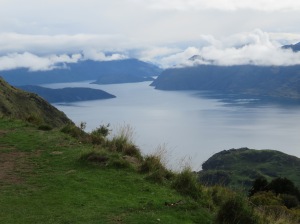 Loren continued into the fog-obliterated unknown but, unlike Scotland, the track was clearly defined so the chance of losing one’s way was minimal. I felt confident to let him continue with other undaunted hikers, as he so wanted to summit this one to make up for not having “bagged” a Scottish Munro. It took me an hour to return to the car, and I took Loren’s suggestion to head to a coffee shop. When I returned at our agreed meet up time I was delighted to see how the clouds had cleared off for his continued hike, and, that he had befriended one of the few others who were about our age out on this tramp.

On our way out of town we stopped to photograph the three enormous Coastal Redwoods that have reminded us of California. That same day we drove the 3 hours to reach Manipouri, in the Fiordland region on the southwest of NZ’s South Island. As Loren’s Physio had said, we did saw The Remarkables along the way. They are unique in being a range of such uniform size and height. We have noticed the terrain change on each stop we made in New Zealand, and here it is true too. But, boohoo, after we left Wanaka I discovered what the real That Wanaka Tree looks like, which was not what we had seen. 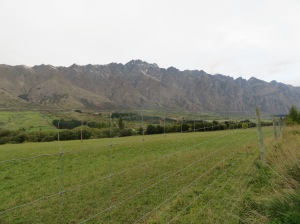 Now we are in Manipouri for a week. Our lodging is walking distance to the harbor for our Doubtful Sound overnight cruise, which thanks to a dear friend we had booked. To reach our ship, we first took a boat ride over Lake Manipouri, then a bus over Wilmot Pass. I kept hearing our first Captain talking about the Pear Station this, the Pear Station that. What I discovered he was talking about was the Power Station, which had made a big impact on the surrounding area some years ago. It took concerted effort on the part of the locals to prevent them from drowning the whole area by connecting two lakes…

We cruised the whole length of the sound out to the Tasman Sea where we saw a colony of fur seals. We learned that this waterway received its name because Captain Cook was doubtful that they could sail it with success. You can notice how the weather slightly changed in a short period of time by how a unique pair of rocks looked both before reaching the sea and after we returned by them on the way back inland again. 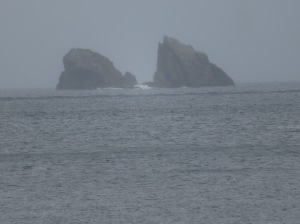 We thoroughly enjoyed our adventure, sitting for a serving of soup, afternoon tea, and dinner with the same three other passengers. We also kayaked a couple of hours through on and off light rain. But overnight it teemed. We awoke to what the naturalist on board described as the most waterfalls she had seen here – each hillside showed one to several. Loren and I were grateful that we had the two days to see the major difference over time.

Manipouri is close to Te Anau, where our Italian friend who we had met in Scotland is now working abroad. So far, he is the first person who we have met up with in three different countries on our Journey! After Loren’s appointment with a new Physio here, we joined our friend for a homemade gnocchi dinner, at the home where he lives with his co-worker housemates – an American and two Italian. A lovely and delicious evening. 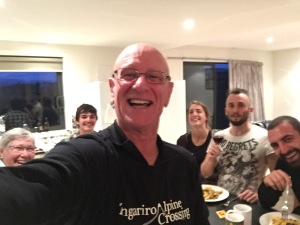 The next day it was pouring, but Loren and I went through with catching our bus for a Milford Sound Trek Guided Day Walk. It rained heavily throughout the morning, then cleared after lunch. I think that had we not had this commitment, but were planning to tramp alone, that the weather would have put us off and we would have missed out. We experienced the rain forest with a knowledgeable guide, a nice group of people, and even met a local Robin who was more than happy to pose for us.

The next day Loren had another appointment with his Physio in Te Anau. Afterwards we went for a long hike on the Kepler Track. Once again I bailed after a strenuous stretch of uphill hiking. Loren and the rest hiked above the timberline, then they bailed – except for one of the young men who continued on to the caves, and would hitchhike home. A common tradition here that is also reminiscent of earlier times in the US, is hitchhiking. 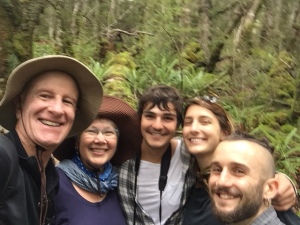 Our last big adventure this week was with taking a two hour Cruise on Milford Sound. It was a two-and-a-half hour bus ride each way to arrive at the ship, and we made a couple of stops for taking scenic photos along the way.

This cruise took us out to Tasman Sea as well, where we saw more dramatic waterfalls and more fur seals. But, what makes Milford more famous than other fiords in the area – like Doubtful Sound which has more arms, or Dusky Sound which is the largest, is that Milford has the steepest mountains along the length of the narrow waterway. Here you can see the last remnants of the mighty glacier that had originally created this sound. 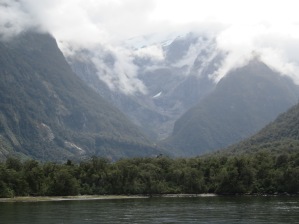 While onboard we met a group traveling from Taiwan who taught us their hand symbols for I Love You, which the man is the photo is demonstrating, and Two Hearts which the three of the women sitting next to him are showing. We also had our first glimpse of the green Kea – three were foraging along the highway on our return bus ride. Kea are the only parrots who live in alpine terrain.

Loren and I finished this delightful week with a final visit to the Physio. One helpful policy for us in New Zealand is that because Loren suffered his injury here, he is entitled to discounted therapy visits. Then, we strolled through a Bird Sanctuary for injured species. This is where we saw our first Kaka, another local variety of parrot, with  a distinctly bright red breast.