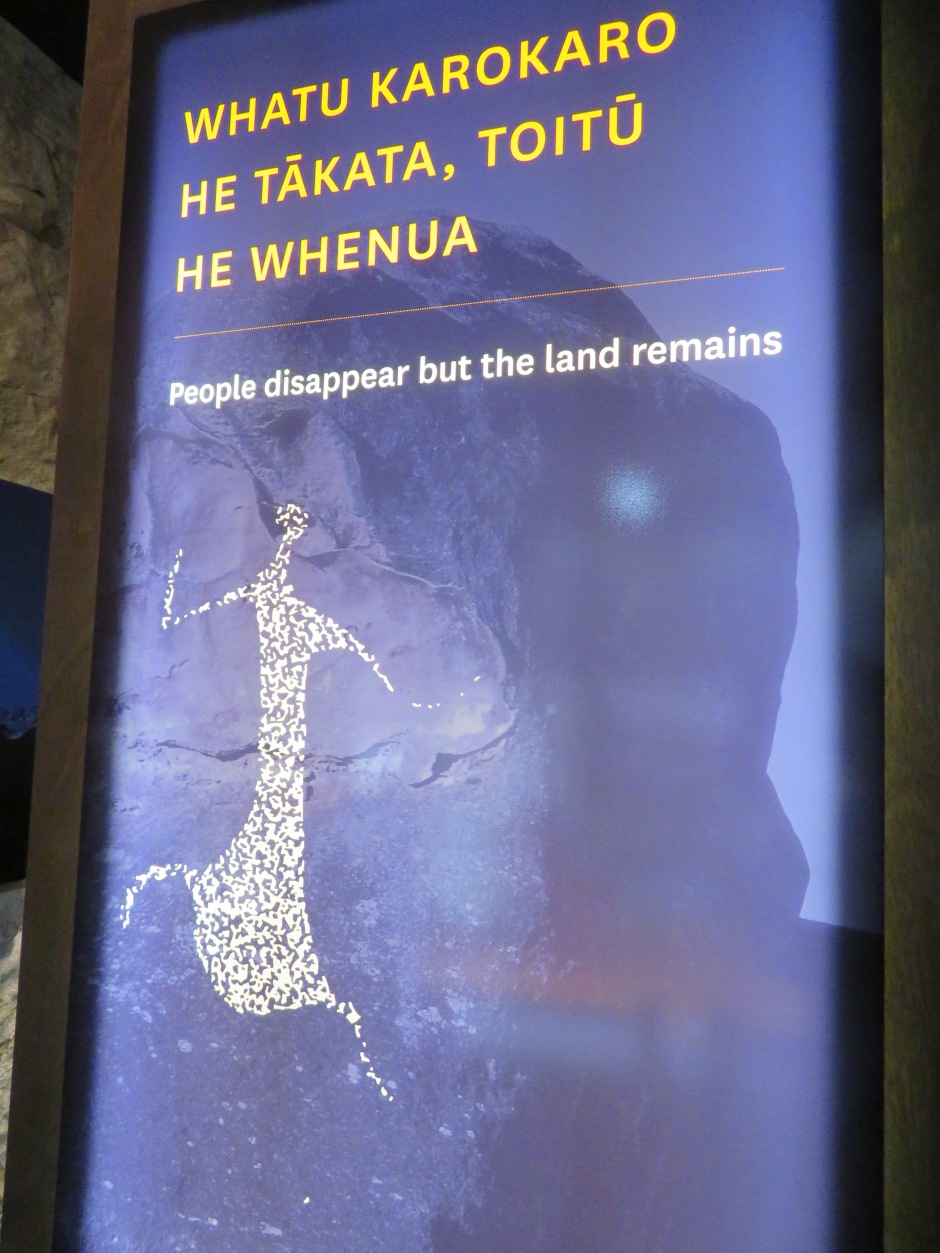 At the start of this week, Loren and I took the early ferry from Oban, on Stewart Island back to Bluff on the South Island. The Maori story we had learned in Auckland when we first arrived to New Zealand is that the South Island was created in the image of a waka – a traditional Maori canoe, and, the North Island was created in the image of the fish that the Maori were attempting to catch from it. While in Oban, we learned too that Stewart Island represents the waka’s anchor. There are large symbolic chain links that disappear into the Foveaux Straight on the Oban and Bluff coasts to exemplify this part of the tale.

A new young friend changed her ferry crossing date to join us in traveling to Dunedin. Our route included the Catlins Coast and we stopped briefly at Curio Bay. Here, had the weather been nicer, perhaps we could have swum with Hector’s dolphins. However with the continual rain all day there was nary a dolphin to be seen. We did appreciate seeing the fossilized forest on the beach. We passed on stopping at Nugget Point – where sea lions live, for the same reason of the weather. It was nice for us to have company for the long drive. After settling into our respective hostels, we had sushi dinner out with her.

The next morning Loren and I were off again, northward bound to Timaru. We stopped at Moeraki boulders, which are quite the curiosity. Then we spent some time in Oamaru, where a dilapidated pier has become stomping grounds for any number of sea birds. 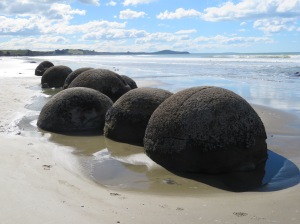 Highlights in Timaru included a walk to a visitor center to see Maori rock art, and, stopping at an aviary on the way back. 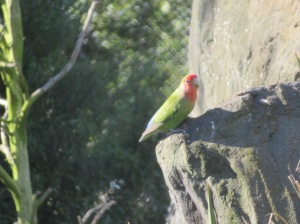 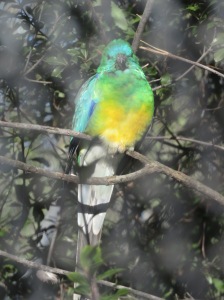 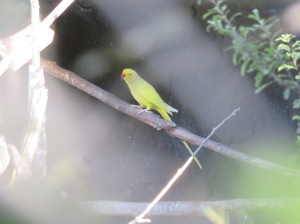 We went on a wild-goose-chase drive as we never did find the recommended hike to sandstone walls for more Maori art. Nevermind, the weather was nice and on the way back we stopped to photo farm Elk, or what New Zealanders call Red Deer who were rutting. That night it poured. Each time it appeared to let up, it poured again, ad infinitum, all night long. 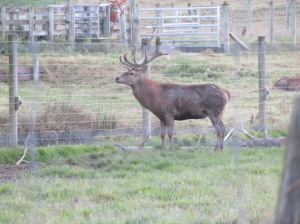 On leaving Timaru we learned that our destination of Tekapo, near Mount Cook, had a temperature of 0° Celsius – 32° Fahrenheit, and would only reach a high of 4° C – 39° F, during the day. As the skies were clear we still drove first to Mount Somers, but the remnants from the overnight rains precluded our hike to see the falls – the heavy rain we had had in Timaru had of course dropped fresh snow in the mountains. We further drove on to Peel Forest, but could not find the walking trail there… our lot this week it seemed. We had our picnic lunch inside our car instead of on the trail, and enjoyed some time along the drive where the sun broke through the clouds. 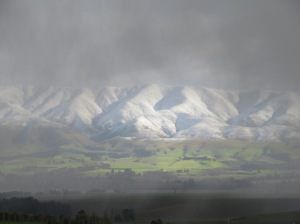 We were successful in finding the Garage Gallery for a break to browse their art, literally in an old garage. We arrived to clearer skies before sunset at Lake Tekapo. Our intention had been to hike around the Lake and up Mt. John… with the cold we were simply happy to sit near the heater in our small cabin. That is, until dark when we braved the elements for our tour at Mt. John observatory.

This area is one of only 11 Dark Sky Reserves in the world. When we arrived at the tour office, we learned that due to icy road conditions on Mt. John, our tour was canceled. Since the skies were clear though, they offered an alternative to stargaze from Cowan observatory with their loaner parkas, which we accepted. The most impressive sight for me was of Jupiter and 4 of its moons through the telescope, as clear and bright as if I were looking at Earth’s moon, though very, very tiny.

The next day dawned with sunshine and we drove around beautiful Lake Pukaki to hike two different easy trails to see Mount Cook.

One was the Hooker Valley Track. We were fortunate that the cloud cover lifted for us to see Mount Cook’s peak! 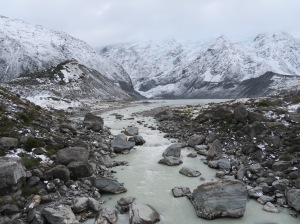 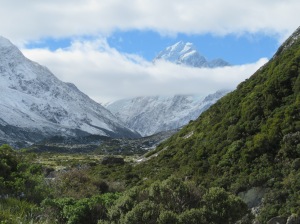 The other was Blue Lakes Haupapa/Tasman Glacier trail, affording a view of another side of Mount Cook.

The next morning red skies foretold more rain to come. We bade farewell to the ‘Starlight Highway’ and made our way to Christchurch. Here we drove around Banks Peninsula to Akaroa, and I was delighted to snap a photo of a White-Faced Heron. 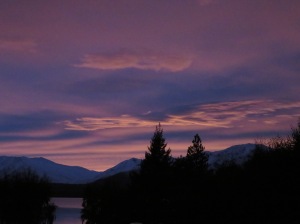 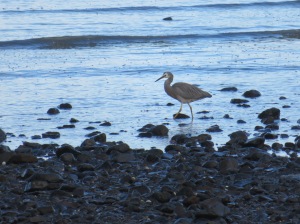 That night Loren and I enjoyed a lovely dinner with my Bikram Yoga teacher training friend who I met up with in Wellington last month, who lives in Christchurch. She and a friend made Japanese and Indian dinner, then introduced us to feijoa for desert – a fruit somewhat similar to guava. It was all delicious!

On our last full day in Christchurch, we drove to see New Brighton pier, then drove through the tunnel to have coffee in Lyttleton with views of the harbor. Then we drove back over the hill and turned in our rental car. I am reflecting on the New Zealand roads. There is no equivalent to the US Interstate system here. Most of the highways we traveled are two lane, with the occasional brief extra lane or dotted white lines for passing. I recognized that I have become somewhat adept at navigating the regularly encountered roundabouts found in the intervening towns or larger cities, while driving on the left side of the road. Now we are on foot again near downtown Christchurch. I have heard the surprising sounds of Canadian Geese honking overhead several times in New Zealand, and now I have a photo of them on the Avon River to prove it.

On a sad note, we are remembering a family friend who lived in Christchurch and who died with his son in an avalanche on K2, doing what they loved, climbing the peaks of the world’s largest mountains. And another is how while driving and walking some of the streets here I have been reminded of New Orleans after Katrina, and New York City after 9/11. Christchurch feels somehow barren in the midst of a sprawling metropolis, with new construction apparent and signs of further work here, there, everywhere. It was sobering to come across a Memorial for the February, 2011 earthquake, honoring the 185 people who died.

Later, it was heartening to find a park with a structure displaying virtues from stories that come from members of the community.