Dear Friends and Family, we so appreciate you following along and reaching out to us recently as well as during the 4 and a half years that we have kept up this blog. It is still, as always, wonderful to hear from you!

To start off this week, while Loren was with his Mom I went to First Unitarian Church of Oakland with a Bikram Yoga instructor friend who has been staying in California for a few months now. It reminded me of how I met her at my Bikram Yoga Teacher Training. She was a friend of a classmate of mine, visiting our training, and the three of us went to see Paramahansa Yogananda’s Self Realization Fellowship Lake Shrine Temple. Not only was Yogananda a spiritual superstar, he was an older brother to Bikram’s guru – Bishnu Charan Ghosh. Anyway, we three had a nice day seeing the temple, the lake and gorgeously landscaped grounds, then having lunch together. This week, it was just the two of us who enjoyed the UU service, then we had a picnic lunch in the park next door. 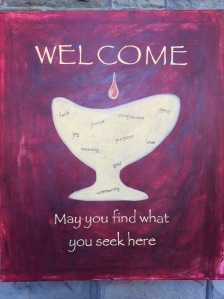 It appeared our week would include rain, beginning with this colorful sunrise one day, however the desperately needed moisture that came was just a tease of rainfall…

On my way to nearly daily yoga classes, I sometimes see some interesting things, and I am always delighted when the horses along my route are near the road. This week though my sights also included a rather bizarre scene from a crashed vehicle… I believe that no one was injured. 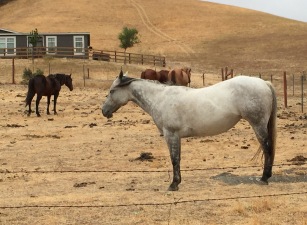 This week too, fun fall activities abound. Are you watching some of the postseason Major League Baseball games too? This week we saw our Oakland A’s lose in their wildcard game to the New York Yankees, then saw the Yankees split 1 game each with Boston’s Red Sox for their best of 5 series.

Fun fall sights and tastes abound too, from Halloween decorations that are popping up in the neighborhoods,

and Loren’s and my homemade crumb pies – that we made with apples from a tree that he has cultivated from when he was a teenager that began as a mere sapling, sprouting amongst the ivy in his parents’ front yard,

to the delightful cats of a dear friend who I was able to have dinner with this week. Her kitties from the same litter are smartly named Pumpkin and Spice, which are even more precious at this time of the year.

Then, Loren and I took a day outing to pick up a pumpkin and walk along the beach at the Pacific coast, something we have tried to do most years as the anniversary of our first date, which was 29 years ago now. On our way there we drove over the 7 mile San Mateo Bridge, and witnessed the coastal fog lifting over San Francisco in the distance.

As he often does, Loren spotted a heron as we approached the lagoon at San Gregorio beach. I am always fascinated by herons! Our arrival timing to the beach was just as the fog was lifting here too, providing for a beautiful day after nearly a week of clouds overhead. 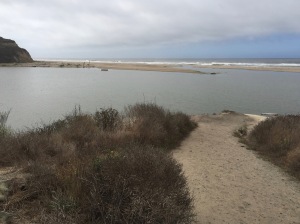 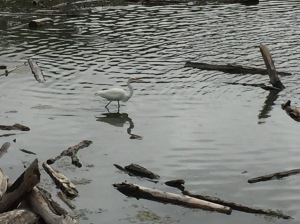 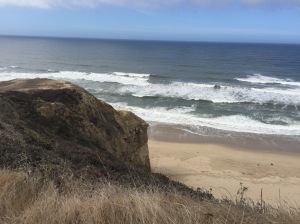 We continued up the coast by car, and I had to stop to take a photo of the largest cluster of Naked Ladies in full bloom that I have ever seen.

Loren and I also stopped for lunch at a restaurant with an ocean view. The water was just shimmering in the afternoon sunlight. Afterwards as we drove “home” to the East Bay by way of San Francisco, we just missed seeing the US Navy Blue Angels at Fleet Week. All we found in the sky were fading gray trails from what must have been the final act of their show. I remember seeing them practicing overhead years ago when we had lived in Sunnyvale – their tight flying formations are just incredible.

To finish I will include an inspiring quote from an email byline that came through my inbox this week:

“Stars only shine in darkness. If I am a Star, I’ll stop complaining about the darkness.
Learning to shine.”

May we never stop learning! Oh, and in addition to a small pumpkin, I picked up a few gourds and ears of Indian corn to decorate the table outside our sliding glass door at our AirBnB…