Loren and I are in Miwuk Village. I could say Me-Wuk, Mi Wok, Mi Wuk, Mi-Wuk, or Mi-Wuk-Village, I have seen it written these several different ways. Anyway, we are in a small populated region in the California Sierra mountains. Nearby, the community of Confidence boasts a settlement of just 50 people. At the start of the week, we drove nearby to stay overnight at the summer/winter home of dear friends. When we arrived, I was challenged by a friend of theirs who was teaching an informal pilates class. My muscles felt aftereffects for a couple of days, in a good way. We all then trekked the short distance to a memorial erected for our friends’ brother and nephew, who died in an avalanche on K2 in 2013, and who were renowned in trekking and in the local area.

Our friends’ community was also approaching the final days of a music festival. From our perspective no details were spared in excellence. We attended the Saturday dinner event, featuring a silent auction and a concert, then an auctioneer led a most vibrant bidding affair afterwards. The evening was staged in a medieval theme this year, and we were told that the most people ever participated in costume. Our friends gave me a special dress to play along. The next day, I was honored that my friend insisted I lead a Bikram yoga class. It might be the one I have had the most fun facilitating of the more than 250 classes I have taught, and I was impressed with how well they did with it. Afterwards we had a lovely lunch at a nearby lodge. 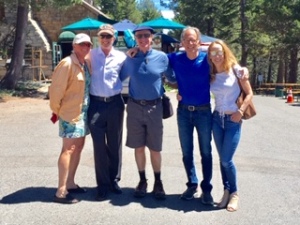 Then we attended the final Music Festival offering – a Beethoven Fest. We were treated to an outstanding performance by a 22 year old virtuoso pianist for the last four numbers of the orchestral performance.

From there, Loren and I were off for a backpack to a place we have been many times over the years. The first time we went it was a long Labor Day weekend, and we saw no one – not even one soul – the entire weekend, except two rangers on the morning we were leaving who were taking samples of the lake water. This time we were similarly treated to an experience of seeing not a single other person, except the several people who were out for a much shorter day hike on our way into our site as well as on our return hike out from the site. All along the way we were treated to an immense display of wildflowers. We named it our own “NorCal Superbloom.” Some of the varieties are: 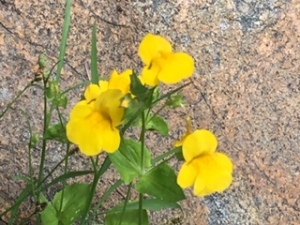 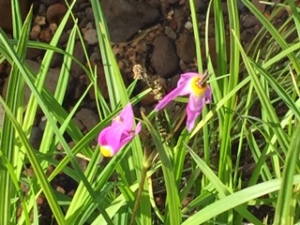 We saw a rainbow around the sun on our way in, which I learned from another hiker is caused by very high, very thin clouds made from ice crystals. She thought it is called a Sundog, but afterwards I learned that is not what we saw. Actually known as a 22 Degree Halo or a Sun Halo, the ring is caused by sunlight passing through the ice crystals. There were also lots of butterflies, of white, yellow, orange and black, and, I managed to capture a photo of one of the rarer, small blue ones/

Loren and I never tire of the beauty visible from where we once again setup our tent and campsite. It is so quiet here. And the scenery around the lake was more green than we had seen here before. 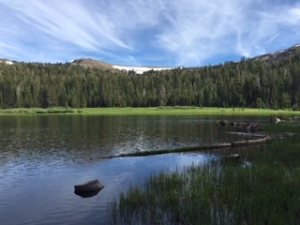 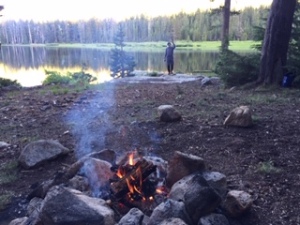 We were treated to seeing a baker’s dozen of geese resting and feasting throughout our stay, and, hearing a cacophony of frogs croaking throughout each night. Loren noticed a deer and a fawn across the lake, and, we even saw the same toad near the same log each time we walked over that part of the trail.

Of a less appealing nature, we encountered a scourge of mosquitos. We also bailed out a day early. There had been a ring around the moon on our last night and the thunderhead clouds we had seen in the distance each day looked more and more ominous. As we looked back from a high peak on our departure, we saw the clouds dumping an immense amount of moisture off in the distance, so we believe we made the right decision. We left the area in sunlight on the downhill side, almost a calling for us to return again someday.