At the beginning of this week Loren and I were still in Mi-Wuk, packing up from our six weeks stay at the delightful “tiny house” AirBnB. We took our hosts’ suggestion to go on a twilight walk, as usually we would return from a walk before darkness had set in. Except in our case this week, it was a moonlit walk as the  moon was still nearly full. Yet we saw more stars in the Sierras with a full moon up than we would normally see in more heavily populated areas due to light-pollution.

In the morning we kept a FaceTime date with friends, one who was visiting their cousin in the Bay area from Cornwall, since we could not meet up in person. You may notice we are making the connection from our car which we drove to a neighboring town, as there is no internet or cell service at the cabin.

Following that we went to a Writer’s drop-in group in Sonora. I was tickled that the one poem I chose to read was so well received that they asked me to read another, which was similarly appreciated. Only two of us were poets, the rest were fiction or non-fiction writers. It was nice to have a comrade poet in attendance. Loren and I then drove to the local casino for a shuttle to the Me-Wuk Indians Acorn Festival on their reservation in Tuolumne Rancheria. We thoroughly enjoyed their Indian tacos. We also appreciated seeing intertribal dancing, chanting with rattling and drums, and the crafts booths with items for sale. I appreciated a sign with in native language in the community building…

We returned to the casino where we had noticed a bowling alley to play three games. It was late enough in the day that during our third game we bowled in the dark to flashing party lights, the first time we have ever seen such a phenomenon. I wouldn’t have thought I could bowl in such low lighting, and was surprised when I could.

Loren and I finished our last day in the Sierras with a hike along the Westside Railroad Trail of the Mi-Wok Ranger Station, along Buchanan Mine Road. We saw wild turkeys, a couple of deer, and had a view of the abandoned tracks and the Tuolumne River Canyon.

Early the next morning we bade goodbye to the cabin where I had collected some of the falling acorns in front to the house, then drove to Loren’s sister’s home, to learn about how to care for her pets over the next several days. 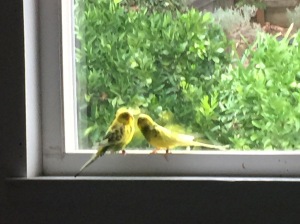 We three went out for a birthday brunch, then took BART to San Francisco. We had tickets for one of the last shows of the 40-year-run of Beach Blanket Babylon’s campy performances at Club Fugazi. Afterwards we accompanied Loren’s sister by BART to San Francisco Airport, where she caught a flight to spend the next few days that included her birthday with their other sister in Oregon. We discovered another advantage with Loren becoming a Senior Citizen, he can now qualify for discounted Clipper transit tickets. 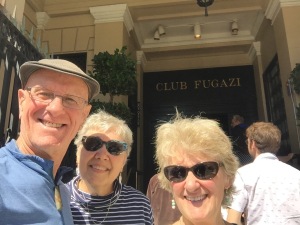 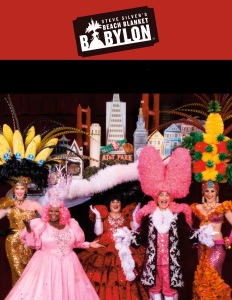 Another couple of highlights this week were taking a hike with a friend at Lake Chabot, where for the first time I hiked up to the camp grounds, a portion of the trail where Loren and I had previously always turned around. We had thought that the mist that started when we first met would be a passing event, but it contained throughout our hike, disinclining me think to take any photos. That evening we had dinner with special friends who are still long-term renters at the AirBnB where we had spent the year to help care for Loren’s Mom nearby.

One day Loren and I had a long day of meetings. We first had a first visit with Loren’s new doctor under his Medicare plan for an annual checkup. We like and trust this new-to-us doctor already. Then we met with our financial planner and, as always, appreciated our time with him. We also picked up our mail, seeing a few dear neighbors, then finished the day with an appointment at our property manager’s office. Loren and I had then intended to drive to Ashland, Oregon where we will be staying for the next month; however we learned of the memorial of a friend from our Unitarian Universalist Fellowship of Sunnyvale, so were able to delay our departure from California a day. It was meaningful to see so many of our friends there, though the occasion was a sad one. 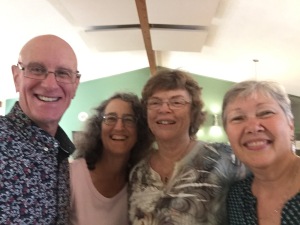 Loren and I spent the night with a very dear friend, and were highly impressed with her latest artistic creations of working with broken ceramic pieces and glass, as she pursues a long time interest in her vision for a particular stained glass piece. I cannot wait to see where this calling takes her next! 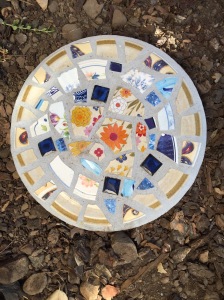