This post is more than a little late, I apologize. Loren and I have been busy with the holidays, and more. We hope you’ve had a magical Christmas, Hanukkah, Kwanzaa, New Year’s Eve, and holiday season, so far. I hope to have our annual letter out tomorrow by email… First, though, I must acknowledge that this was the 300th Week since we left our home in San Jose to travel the world on April 5, 2014!

We have big news about that, please check back here next week to see what it is? 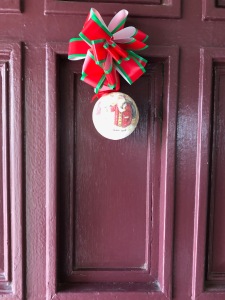 This week Loren and I pet-sat for Loren’s sister while she enjoyed her Christmas visiting a friend in Washington state. Sadly, I have been negligent about taking photos of friends we saw this week… and I regret that. One photo I did snap was of a picture from when Loren and I were dating that Loren’s sister had in an album. After ensuring Loren’s sister made it on time to the airport, we enjoyed a catchup dinner with special friends who we had met at the AirBnB where we stayed for the year when we helped care for Loren’s Mom. It was so nice to see them again. Then we learned by text that instead of leaving as scheduled, Loren’s sister’s flight was delayed for several hours. In the wee hours, we were grateful to hear from her that she had arrived safely in Seattle. 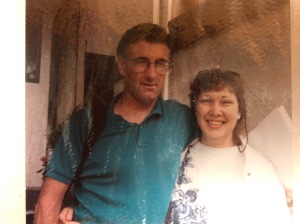 Loren and I also enjoyed another delightful dinner with dear friends at their home. We had another fun lunch with other friends at their favorite Chinese restaurant. One other day Loren and I drove to San Jose and spent a full day doing much needed heavy yard work at our house. And, in between I taught several Bikram Yoga classes at the studio near Loren’s sister’s house. 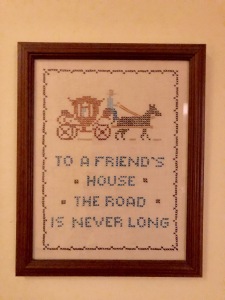 On Christmas Eve, we had the pleasure to have Loren’s Godson over for lunch, and he shared his slideshows with us from his month-long trip to Madagascar in October. We were enthralled with all of his amazing photos of the gecko, chameleon and 14 of the island’s 120 species of lemur.

That evening we attended the first part of an open house at other friends’ home. Later, we had another delicious meal with special friends, at Loren’s Godson’s parents’ home.

On Christmas day Loren and I had a good FaceTime visit with my brother and his family who live in New York. Then, we had a wonderful afternoon and evening with dear neighbors. We caught up over hors d’oeuvres, enjoyed a fabulous dinner together, 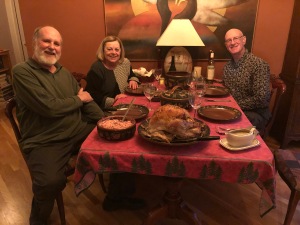 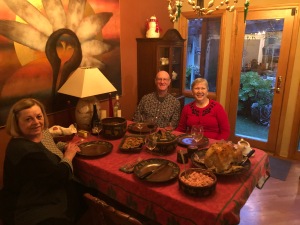 and watched Polar Express over dessert. What most stood out for me this time from the movie is the meaningful quote:

There’s no greater gift than friendship.

Amen. I must say at this time of year it is all the dear friends and special family members who are the greatest gifts in Loren’s and my lives. Thank you for being part of our lives! 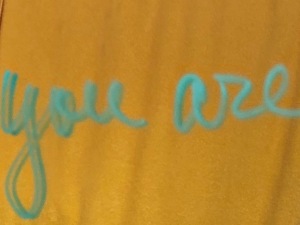 The day after Christmas, Loren and I enjoyed a memorable breakfast gathering with many of the parents, and, now, men, who we spent many fun times hiking and backpacking with over the years when they were mere teen-aged boy scouts.

The next evening, we had a wonderful walk after a dinner out in San Jose with dear friends, seeing the amazing lights display in our home neighborhood. 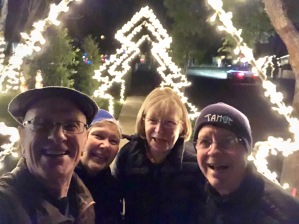 That evening we again walked by the several neighbors who string Rudolph and other reindeer all the way through to Santa’s sleigh across their lawns. But this year for the first time the sleigh yard added an aspect of how the sleigh is powered “electrically,” ha ha. 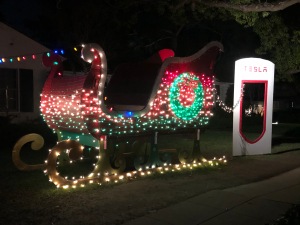 Another first for us is that one of the houses has set out three chairs in front of their reindeer, which we determined were for taking a photo. So we did! 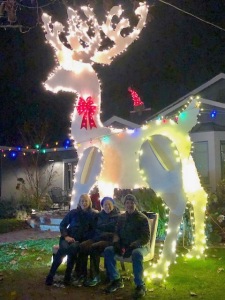 It is hard to believe that this is already the end of 2019. I noticed that the numbers in the year 2019 include the abbreviated numbers of both the centuries in which I have lived — 1900 and 2000 — in the opposite order, 20 and 19. Now Loren and I wish you a most happy, healthy and prosperous ’20! 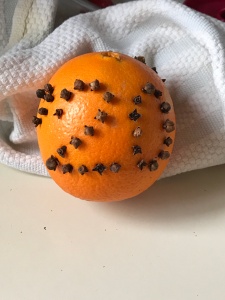