This week I am reflecting on how wonderful, even luxurious it has been to have a full week in the same place. Usually we are on the move after 1, 2, 3, or, maybe, 4 nights. Lugano is quiet, with not too much to attract our wanderlust. We did consider the train for a day trip to Bellinzona, then reconsidered when we realized that we probably could not recreate the enchantment that we had felt there 20 years ago. So, this week we stayed close to “home.” I had time to dig out my sewing kit to stitch up a few items that have needed repair. More importantly though we firmed up our plans for when we will leave the Schengen Area on July 6, as our 90 days visa limit will come to an end. How fortunate to be traveling in the era of Internet service – even though our connection at times was excruciatingly slow, we were able to accomplish enough to then be able to rest a bit.
We left the Swiss Ticino region to return to Italy by train, and are now settled in for another week here as well. This is a view from our Balcone sul Lago di Como – Balcony on Lake Como, AirBnB accommodation.

We actually had a dinner this week that was less than wonderful – quite surprising for Italy. The markets in our little village of Moltrasio are closed on Mondays, so we had a choice between only two small Bars that were open. Found all over Italy, these are more similar to a cafe, bistro or New York diner than what we Americans would consider a place mainly to drink alcohol. The Bar we chose had a limited menu… and, the pizza we ordered was edible, but nothing to rave about. Later the ominous clouds broke out with numerous flashes of the brightest lightning – accompanied by the longest and loudest rumbling of thunder – that rank among the worst I have ever experienced. I was very grateful to be safe and dry in our bedroom.
On our first full day here, the forecast was for a sunny morning with rain in the afternoon, and, for rain every other day while we are here. We chose to risk taking the regional boat, which made about ten little village stops, before reaching our destination of the village of Bellagio. 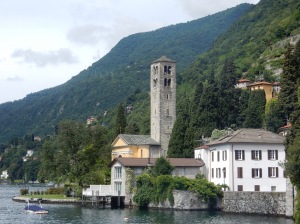 We had decided that we just had to get off at Bellagio, as the resort of the same name was our favorite place to watch the free choreographed water and light show years ago when we were visiting in Las Vegas. We were fortunate in that the rain only drizzled as we explored around here. 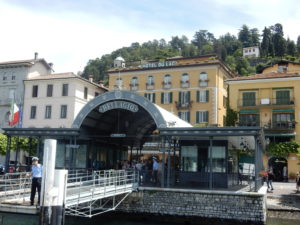 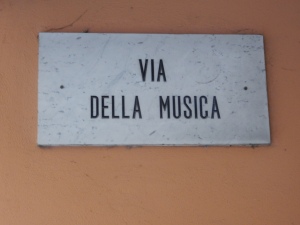 That night we had another spectacular series of thunder and lightning storms, which dropped a forceful and continuous amount of rain from start to finish. I am wondering if the thunder sounds so loud because it is exaggerated by this long lake lined with mountains on either side. Would the openness from our staying on the mountainside beside the lake explain why the lightning seems particularly bright? And, perhaps the sound of the rain seems forceful because it is raining onto a large body of water. Anyway, the showers help the flowers, which are delightful. 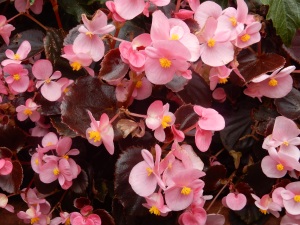 I am also sad to say that I had another mishap, which impeded my ability to walk some. I smashed a baby toe on a metal bedpost at our previous AirBnB. It was quite painful to put my foot in my boot – we wear our hiking boots when we wear our backpacks and daypacks to travel. I was fortunate though in being able to carry my packs just fine to and from our buses and train on our way to our AirBnB in Lake Como. Once here I elevated my foot, iced it, and did so again over the first couple days while we were . inside. But, I was unable to join Loren on his ambitious five hour hike up in the mountains one day this week.
Loren was fortunate in that the weather forecast was wrong – he had an overcast but mainly dry day. He took the steep route up Monte di Lenno on the Sentiero Bisbigno to Refugio Bugone, where he was the one guest spontaneously invited to a family gathering to celebrate a 25th wedding anniversary. Being the only guest also meant that he was also the sole photographer, to the family’s delight! Then he continued on the Sentiero di Piano – the slow path, toward Monte di Liscione – meaning delicious mountain, and back to Moltrasio. That night we had no thunder and lightning, though the rain that came during the night was still forceful and loud. 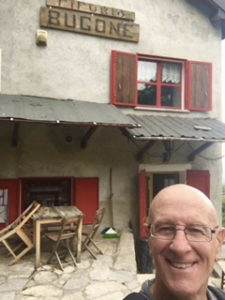 The next morning our AirBnB host who is the skipper of a water taxi, had the day off. When he asked how my toe was I admitted that I was quite worried that I had broken it and maybe more than just the toe as I have had shooting pain up the side of my foot on and off when I walk. He generously offered to drive us to the neighboring village to a clinic. There we discovered that the clinic was officially closed to just ambulance care until the evening, so our host kindly offered to accompany us to Ospedale Sant’Anna in the city of Como.
First though, we stopped at our host’s favorite bar for coffee and a pastry. This is where the Municipal – municipality, offers alternative schooling to at-risk youth, and is a place for them to learn English and how to serve customers, as well as attend classes. The outdoor tables are made by encasing crushed automobile parts, making them too heavy to carry away, and the companion seats are made of old tire rims. How clever and resourceful! An art-nouveau castle shares the grounds of the village offices and bar. Loren and I have finally learned the right way to order a tasty, to us, coffee: we remember to ask for Latte Macchiato. It has a bit of espresso with lots of milk.

Our host had planned to read a good book on his day off, so was most content to wait with us with his book for the long emergency room visit. The outcome is that there is nothing broken in my foot. Yay! Now I am just taping two toes together. The rain came early and poured and poured while we were driving back to Moltrasio. While at the bar that morning, we had learned of a concert that evening featuring a One Man Blues/Jazz Band, so we three returned to the Bar for a fun evening of finger food and music. Upon arriving home we were greeted with – what else? A strong rain storm!

Over the past few weeks, in addition to the exciting American Basketball finals – Go Warriors!, Europe has been having finals in Football – Soccer to Americans. Our AirBnB host watches at night and is rooting for the French to win the European Cup. He feels that since France experienced the recent terrorism that he would like them to have an uplifting finish to this competition.
Today the sun is out, the sky is bright blue with just a few clouds, as of yet. Loren and I are off for a bike ride around some of the nearby villages…