Loren and I started this week still in the village of Moltrasio. The first day’s prediction of rain at 4pm was only partially accurate – at exactly 3:57pm we heard a rumble of thunder! It was surprising then when we had no rain. The exact same phenomenon occurred the next day. So, we enjoyed a few evening walks – the first good weather where we would want to be outdoors after dinner. The first evening, we found the edges of Lake Como swollen from the prior rains, to the point that our AirBnB host joked that the central piazza in the city of Como was flooded, “like Venice.” Another evening we happened upon a village festival, where we enjoyed a plate of homemade polenta and wine despite the slight sprinlking of rain. Yum!

Loren was disappointed this week over the loss of the final regular season game of the US NBA Basketball series – his Warriors lost by only 4 points. Ah well, maybe they will have alternate year championship wins like his San Francisco Giants have recently had! One night we invited our host to share our dinner. He said it was like having Sunday dinner. I realized it was Sunday, very nice to sit at his table to eat together as if family. He and Loren also enjoyed a little of the football (soccer) finals here in Europe on television.

Our intentions were to rent bicycles on two different occasions this week, but, as each of those gorgeous days wore on, we were both so engrossed in our technological devices that it turned out we were 0 for 2. The good news is we firmed up more details of our next several weeks. While we worked, we heard frequent intense cries and seeming laughter of gulls flying outside, plentiful around lush and green Lake Como. On taking our leave mid-week, we had a quick morning walk through the city of Como – each of us separately while the other stayed to watch over our baggage at the train station.

Now we have met up with our wonderful friends from Bavaria who have joined us in visiting at Lake Garda for a week. The start of summer has brought good weather here, lucky for us! 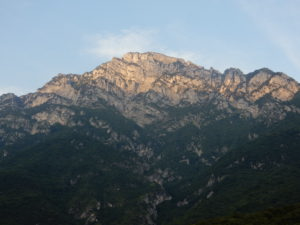 So far we have enjoyed driving around parts of the Lake area together in our friends’ car. It has been a pleasant change to be a passenger, to relax and see the scenery instead of driving or navigating. One day we drove to the city of Riva del Garda, to nearby Lake Tenno, and, to see Cascata Varone – waterfalls. 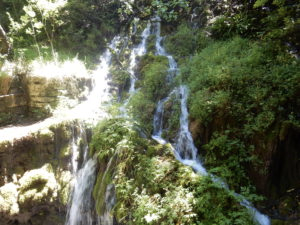 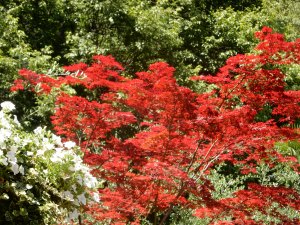 Early one morning we took the funicular ride to the top of Monte Baldo, where we hiked, pic-nic’d and enjoyed the spectacular views, including part of the Dolomiti range in the distance. As we exited the funicular back at the bottom in the early afternoon, we congratulated ourselves for taking the earliest ride, as the long lines were bulging with masses of people awaiting to ascend. 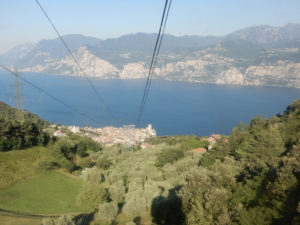 Another day we drove farther away to two more lakes, named Ledro and Idro. Gorgeous! 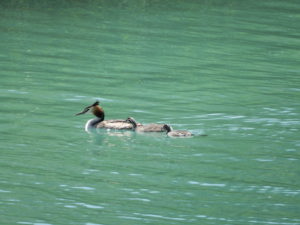 We have had a few walks from our two bedroom AirBnB apartment to the nearby beach, and on the trail around the lake. With the heat it has been nice to have the cool and very clean water, but, the stone and pebble rim of the lake underfoot makes it challenging for me to enter the water…

Tomorrow Loren and I are off early for a bus ride to Verona for the day to see friends from New York for – a morning bike ride, followed by lunch.