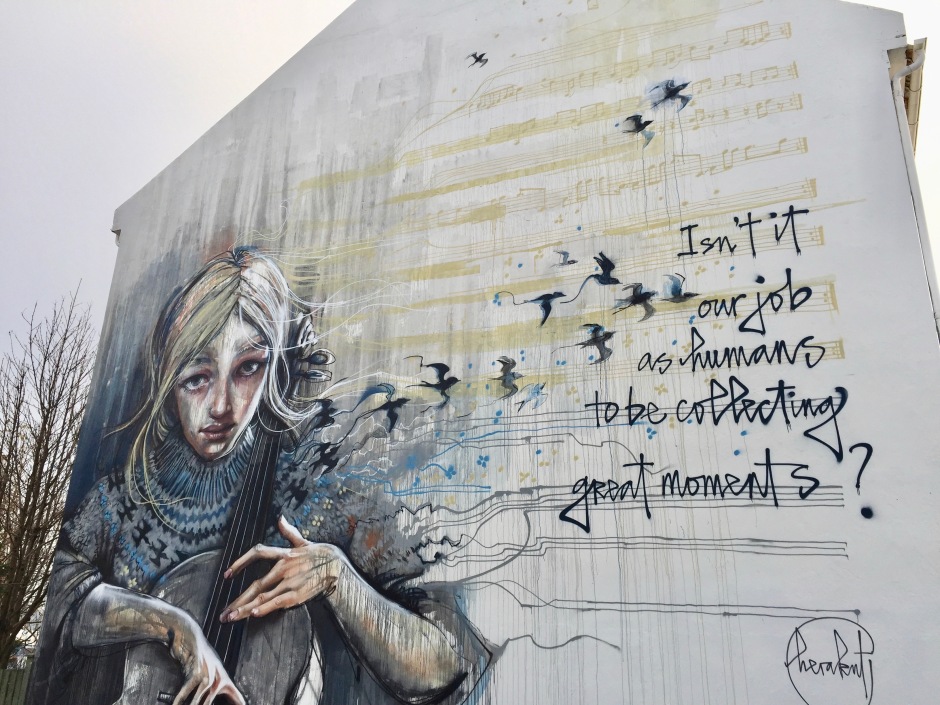 I am posting a day early, as I foresee having little time to log into this site in the next few days…
We were still in Berlin at the beginning of this week. For several weeks the Sammlung-Boros “Art in a Bunker” tour had been sold out, and the only cancellations were for groups being led in German. However fortune favored us as two spots in an English led tour opened up just in time for us to visit. Here we learned a bit more about the bunkers built during WWII, saw several memorable art displays – no photos were allowed, and first heard of Saint Théophane Vénard’s final letter through the piece ‘Desire of the Other‘ by artist Dahn Võ.

The same evening we met up again with our Dutch and Russian friends, who we had met in Macedonia – at her art exhibition titled ‘Morphologien Des Wandels’ – Morphologies of Change.

We also had the pleasure to meet his parents who were visiting Berlin from the Netherlands. Then we bade So long, Farewell, Auf Wiedersehen, Goodbye to Berlin. I think you can choose whichever one you like if you trust Google translate – we had to Abfahrt – depart, Abgang – leave, and take our Ausgang – exit… only for now I hope! After days of gray skies and misty rain the sun shone brightly over Berlin – just in time for our flight to Reykjavik, Iceland. C’est la vie! 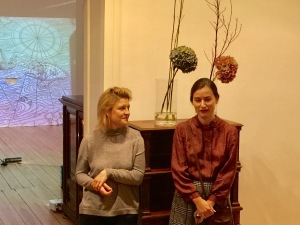 We arrived mid-afternoon in Iceland to totally gray skies too, not unlike our experience two years ago at exactly this time of year, except at that time we were in Churchill on the Hudson Bay in Canada. But here I noticed white roofs! I had to do a double-, even triple-, take. The only time I have ever seen white roofs is when snow has covered the houses, trees, lawns, everything. Here, only some of the roofs were white, and I had to get used to it meaning just that, and that no snow was to be found anywhere right now! In Reykjavik we had a day on a Hop On, Hop Off bus as we had done in Heraklion on Crete. It is one way to have an introduction to, and travel a bit around, a city that is new to us. We stopped to see the large church here – Hallgrimskirkja – and rode the elevator to the top of its impressive tower for the view.

We walked a bit around the harbor to see the Viking ship – an appealing piece of modern art, then had our first Sushi in a long while. We also took an evening Northern Lights tour on a quest to see the elusive Aurora Borealis. We “failed” this time as the tour guide summed it up. I hope this hunt will not be as long a wait as Loren’s goal was to see a moose in the wild earlier on our journey! Not only were art sculptures plentiful, there was also an abundance of street art found on the sides of buildings all around town.

Another day, during a self-led exploration of the city, we stopped for a hot dog at the famed Baejarins Beztu, but came away with the conclusion that a hot dog is a hot dog is a hot dog – maybe our opinion was affected too from having had curry bratwurst in Hamburg and other wursts Berlin recently. Speaking of food, Loren was also keen to try a traditional Kleina – donut, made the Icelandic way – cut in the shape of a diamond and not glazed, as compared to the more familiar Kleinhuringa which are round and glazed.

We visited the free Museum of Photography, then hiked past the lake…

to Perlan where we enjoyed a bowl of soup in the slowly rotating rooftop cafe, though to us it seemed not to be rotating at all, for another birds’ eye view of the city. We topped off our evening with a visit to a different Sushi barinn – restaurant. Yum!

We also took a day tour called “Glaciers, Waterfalls and Beaches of Southern Iceland.” I have only had one other experience of seeing a glacier in person – when we were in the Canadian Rocky Mountains on this journey. This time we were able to hike much closer to the edge and actually saw the turquoise in the ice.

The beaches, like one we visited once in Hawaii, are made of black pebbles, from the volcanic nature of the terrain. Our informative guide Iris but pronounced like Ear-is, described the massive flooding that occurs in the farmlands after a volcano that is buried beneath a glacier erupts. They have to have a specially trained rescue corps and evacuation drills for that reason. Here too we found the familiar basalt columnar formations that we have seen at Devil’s Postpone in California, Devil’s Tower in Wyoming, and the Giant’s Causeway in Northern Ireland. 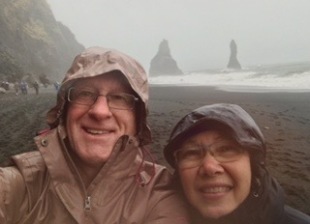 One more day here found us visiting Aurora Reykjavik – a museum devoted to the Northern Lights showing photos, videos and information gleaned from NASA. So there to the elusive phenomenon! Well, except that we still hope to see “The Lights” in real life. We also stopped in at the Phallological Museum. Yes, there is actually a museum devoted to displaying specimens from an assortment of animals. We decided to skip on browsing it other than to have a look in the gift shop, which was full of phallic items for sale. I passed on taking any photos but will forever remember the floppy aprons.

We had one more fulfilling dinner of Sushi before attending Sinfoniuhljomsveit Islands – Iceland’s Symphony Orchestra at Harpa concert hall. This particular program, being performed during the popular music festival named Iceland Airwaves, featured “new music” pieces by talented artists, explaining why I was surprised to find ushers offering packages of ear plugs for sale at the door… A memorable performance was presented by several musicians on a two-tier stage. It was in honor of 10 years of affiliation to the “Bedroom Community” record label, with Crash Ensemble of Ireland. I just realized – there is only one letter difference between Ireland and Iceland! The event was all in collaboration with the orchestra and a choir. It was touching to see some of the performers share happy anniversary hugs between pieces. 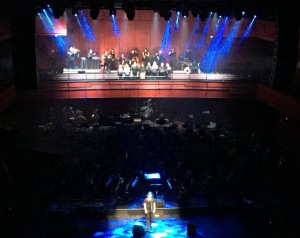 Before we leave Iceland, which is mostly not covered by ice, or volcanoes – The Land of Fire and Ice is it’s nickname, we have two more full days planned here. Then we fly to New York for a very special someone’s Sweet Sixteenth birthday celebration!