We finished our visit to Iceland this week with three big activities. The first was a day tour of the “Golden Circle” including a visit to the Laugarvatn Fontana Geothermal baths. Loren commented while on our tour how beautiful the middle of Iceland would be if only it were a sunny day. The forecast at the beginning of the week was for full sun, but, like they say here the weather can change in 5 minutes’ time. And it did so midweek. The report changed to calling for clouds with possible rain as every other day. Lucky for us though, the clouds dissipated partway into the afternoon! We saw the rift in the earth at the point where the enormous tectonic plates of North America meet those of Eurasia. Our guide Sven joked that since we were in the Schengen area we would not need our passports to cross the continents as we moved from one side to the other. 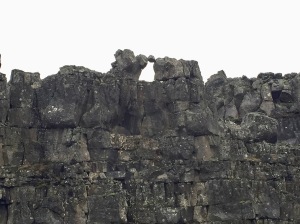 We soaked in a geothermal bath similar to hot springs we have visited in the US, saw geisers – geysers, erupt and, saw an incredible waterfall. 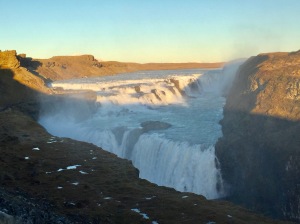 We did not witness volcanic activity, but we drove near enough to take a photo of Eyjafjallajökull – do you see how it was nearly impossible to learn any Islenska, well, except for “Skol.” It was hard enough trying to remember how to pronounce Reykjavik, the capitol city of Iceland, much less spell it with any resemblance of the actual name. Eyjafjallajökull is the volcano which erupted in 2010, and disrupted all of Europe for a period of time in the aftermath. Oh, and by the way, Reykjavik is said, rake-ya-vick.

A second big activity was the evening tour – our final chance while here – to see Northern Lights. First we watched an engaging movie at the horse stables bar where our Northern Lights Tour had brought us the first time. This ranch is far enough from the interference of city lights, while also offering amenities. The movie showed fabulous scenes of Aurora Borealis. While we watched what at times looked like pale-green-breeze-blown-ribbons, I reflected on what I had learned: Aurora is Latin for Dawn and Borealis is Greek for Northern Wind. Our guide called us out to see a faint hint of the phenomenon, then we boarded the bus to leave. But someone immediately demanded, “Stop the bus!” We all got off again to see a true lights display for an hour! Loren’s camera captured it. Mine – just a slightly older model – caught only inky sky and other backlit devices trying to capture it.

Loren likes to say “The third time is the charm,” and so it was with this magnificent experience. What we saw brought to mind these images among others as the lights moved and morphed: large traces of greenish white chalk left after an eraser has smudged out handwriting on a huge blackboard, a giant eerie Frankenstein-green bird soaring towards us, and, streaking neon green locomotives making their way across the sky in the chill, clear starry night. At one point Loren picked out a faint pink color, reminding me of wildflowers swaying in a summer breeze over a green meadow. As well I spotted two shooting stars during the natural performance!

Just as dramatic as the rest of our day had been, when we were dropped off at 1:30am to our AirBnB, Loren stepped off the van transport in exactly the same place and at nearly exactly the same time as earlier in the week, only to slip and fall as there was now a thin sheet of ice on the pavement. In just 3 days, the weather had turned cold enough to create ice on the very pavement where we had stepped off the bus to dry pavement previously. Fortunately Loren was uninjured. Iceland really is “The Land of Fire and Ice!”

Our last day was spent in part at the Blue Lagoon, an expansive geothermal pool where we relaxed for a couple of hours. Our third and final big Icelandic activity was to splurge on a 30 minute massage for each of us sandwiched between soaks here. I have never had a massage while floating on water before. Both Loren’s and my masseuses were expert at their craft. From here we picked up our bus to the Reykjavik airport. 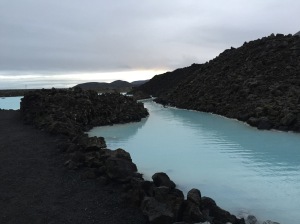 As much as we enjoyed our time in Iceland, I rather doubt that we will return, only because it is quite expensive. Food, transportation, attractions, excursions, for the most part raised our eyebrows at the price, but, we indulged in what we felt was most important for these once in a lifetime experiences. I agree with Loren – if everywhere we went were this costly, we would not have traveled as far nor as wide.
Here is my latest poem inspired from this unique place:
Aurora Borealis in Reykjavik
by Claire Adalyn Wright
Northern Lights
Plentiful greens yellows and white
Sometimes pinks purples or reds
But seldom blues, that can
Look like:
Angels’ wings
Dancing strobe lights
Lightning flashes obscured by clouds
Rainbows
Sunsets
Swirling snow
The Milky Way
Theater drapes closing
Theatrical lighting
Tinted wispy smoke
Water color paintings
Whirlpools
Windblown sheer curtains
And, are
Perhaps best viewed
Beside bodies of water
For additional reflective brilliance.
In all, they are displays
Of the always imperfectly
Perfect nature.
Can this teach me to let go
Of perfectionistic tendencies?
We had an uneventful flight to JFK, going to bed in New York at midnight – which was for us 4am Iceland-time. On our first full day back, it was an incredible sunny fall day where the season is reported to be two weeks late, allowing us to see spectacular fall colors. With the sun shining through, the vibrancy of the leaves of crimson, rose or fuchsia reds, pumpkin and peach oranges, golds, browns, and yellows, were simply breathtaking.

That first evening in New York was the big special event that brought us here earlier than for Thanksgiving: our younger niece’s 16th Birthday family party! 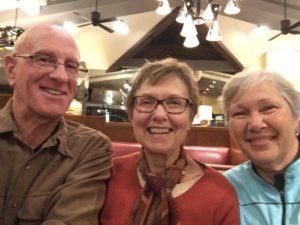 But wait! Our big news this week is that we have been saving our accumulated airline miles for years, but on this journey so far have rarely been able to use them for various reasons – until now! We will have an excursion to Antarctica in December, and were able to cash in miles for airline tickets. We fly from New York to the southernmost city in the world: Ushuaia, Argentina, where we will board our ship to travel for over a week to Antarctica. Loren has wanted to see the 7th continent – not that this is our 7th – yet! And we took advantage of a discounted offer that we could not pass up.
This week we also received an email about the video taken when we had a cooking lesson in Kefalonia, Greece.