We wish our Dear Family and Friends a Happy Hanukkah, to all who celebrate!

This week we met some fellow travelers at our hotel. With one, we made a date for a night out to dinner together. Originally from Chile, then Easter Island, she now lives in New Zealand. She is not leaving Kathmandu until the same day that we are, so we will be able to spend more time with her. We also met a couple of American filmmakers who had sold their home in Florida. Before they left for the airport we enjoyed a couple of conversations, one about the film they just made about building a volunteer Earthship in Nepal. Loren and I had stayed at an Earthship in Taos, New Mexico last year, where the architectural design was developed. We learned from this couple that PT stands for Perpetual Traveler. Loren and I know that we are not PTs, we are simply on extended travels, for now.

We also had an enchanting afternoon and evening at the Garden of Dreams. This was once a palatial garden that had fallen into disrepair, and has been reopened now for some few years. It affords innumerable nooks with bench seating, where it seemed that nearly as many couples sat close, enjoying the quiet solitude. We spotted our first Christmas tree at the cafe here and splurged on a light meal. I noticed that some dishes on the menu included the GOD acronym in the name. At dusk, flocks and flocks of crows cawed and cawed as they flew nearby, as they do each  morning near our hotel, but this evening being outside reminded us both of the Alfred Hitchcock thriller, The Birds. By staying to eat, we were then treated to the attractive night lighting of the grounds. This park offers a welcome respite from the chaotic city streets just outside the Garden walls. 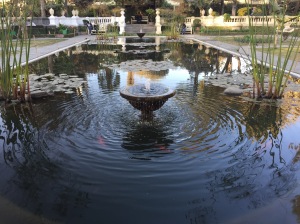 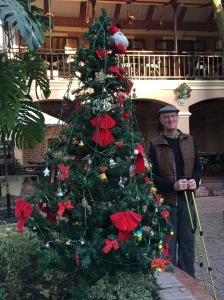 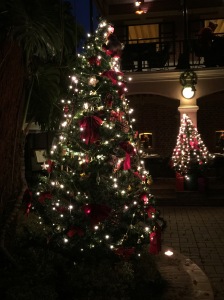 The rest of the week found us with Dil again. This time he was guiding us on a trek in the Kathmandu Valley. On the way to our starting point by car, we stopped at Gokarna Mahadev Temple. I had read that this is “a visual A-Z of Hindu iconography.” The only image I could identify with any certainty was Brahma, from his four heads. Brahma is the supreme Hindu diety, called the Creator. Dil helped me identify a few others that were less known to me. 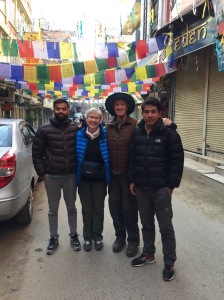 We then began our trek in the town of Sundarijal, along the southern edge of the Shivapuri-Nagarjun National Park. We trekked north, on trails in lush forested “hills” – which to us are more massive than that name implies. True to the write up I had read, we passed through several traditional villages, and saw many, many small farms, each home to a buffalo or two, some goats – more so than sheep, and usually several chickens. 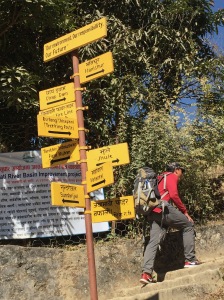 We had our first views of the snow-capped Langtang range of Himalayan peaks as we approached Chisapani at the north end of Shivapuri Park. Also spelled Chisaapaani, it means cold water. This tiny village where we spent our first night had been all but eliminated in the 2015 earthquake. We learned from our guesthouse family that sadly, “six people were killed here, and everyone was injured.” The owners of the most badly damaged buildings have chosen not to rebuild and since relocated to Kathmandu. Such a tragic event for such an idyllic setting… 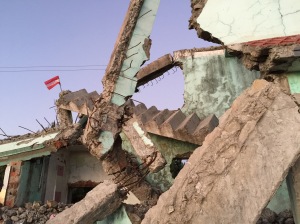 We continued on after breakfast with our next night’s ambitious – for us – destination of Nargakot. The  downward slope to Jhule village was incredibly steep, demanding that we take it extra slow, so we stopped for overnight accommodations with a lovely Nepalese family just outside Jhule instead.

The panorama of surrounding mountains on our Kathmandu Valley trek were supposed to include Mount Everest, but, for our two whole days out, the easterly direction toward Everest had been completely shrouded in haze. We did have wonderful views of the Ganesh and Langtang peaks though…

As we set out again in the morning for Nargakot, I spoke out loud my prayer for the haze to clear off. And with each string of prayer flags that I saw as we walked, I silently said my plea. When we arrived in Nargakot, not only was it was completely clear, it remained so until sunset, and we were able to pick Everest out in the distance from a detailed map provided by our hotel. In the photo below, she is barely visible in the background to the right of the highest peak in the center. There were some friendly people at our Nargakot accommodation, and we especially enjoyed talking in Italian with a couple from the Lombardia region of Italy, and, a young woman from New Zealand. Another young couple with their year old son, from Canada, will spend the year working in Kathmandu. 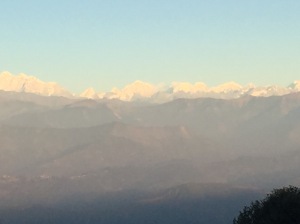 Nepal is home to 8 – more than half – of the world’s 14 highest peaks over 8,000 meters. We had already seen Dhaulagiri living up to its name, “The Shining White Mountain,” and the Annapurna Massif from our first trek to Poon Hill with Dil on another beautiful, clear morning. We had seen Manaslu, ‘The Mountain of Spirits,” the Annapurna Massif, and Dhaulagiri, from a distance when Loren and I had hiked up to Sarangkot from Pokhara too. But Mount Everest, known in Nepali as Sagarmatha, is the tallest in the world at 29,035 feet or 8,850 meters from sea level, striding the border with Tibet. It is also known as Chomolungma or Qomolangma in Tibet, and Zhumulangma Feng or Shengmu Feng in China. Most westerners refer to her by the British surveyor’s name.

We were so lucky that the skies remained clear on through to sunrise to see her again, with an even better clarity to our view. Our Italian friends were up on the rooftop early too, to share in the excitement. I asked Loren to help point out Mount Everest in the distance so that there is no mistaking now just which peak is hers. 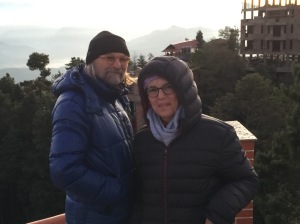 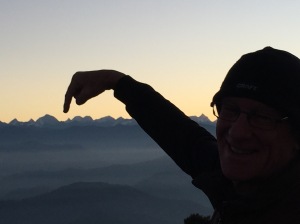 As we continued our trek and viewed the surrounding Himalayan vistas, I came up with a way to help me remember the names of the peaks from west to east. It started out as just mangle:

Everest was still visible as we began our day trekking to Dhuilikhil. Can you find her again? As the morning wore on, our views of the unfolding scenery were similarly spectacular. 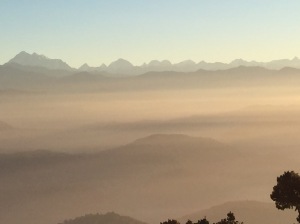