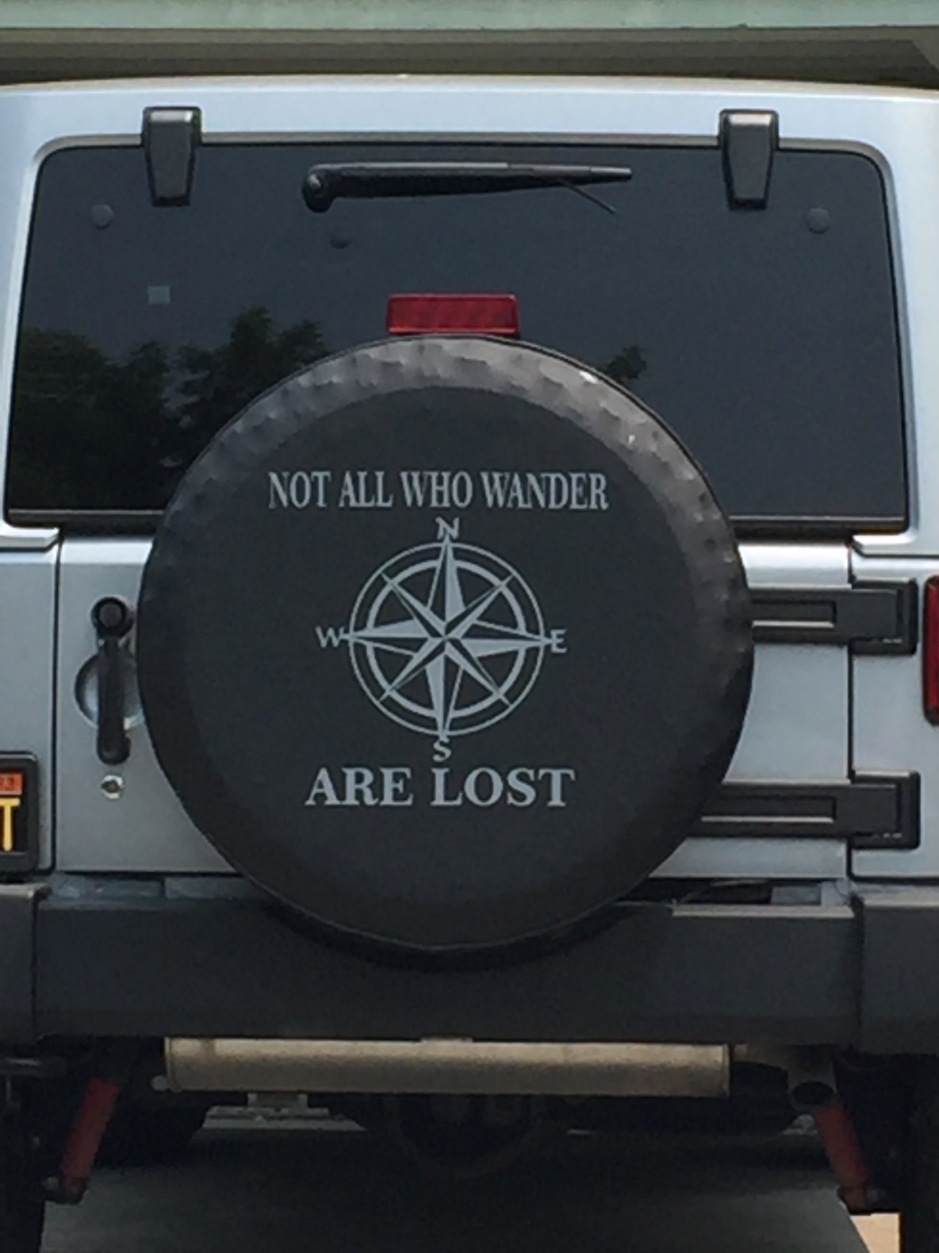 Loren and I were still visiting with friends in Sonoma at the beginning of this week. We enjoyed dinner at a restaurant of the lodge named for the famous author of The Call of the Wild and White Fang among other titles, who lived the last years of his life in this area. Afterwards, on our way for ice cream we noticed the moon and thought it was so orange because of the Yosemite fire, however, we learned from the grocery proprietor that it was due to an eclipse. Wow, I snapped a first photo of a moon eclipse! 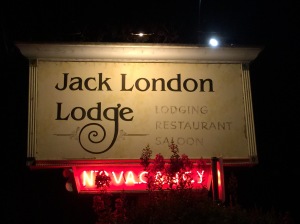 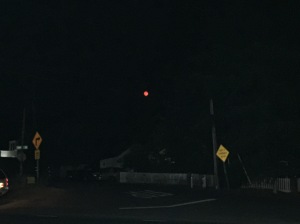 In the morning Loren went for a 2 hour hard hike with her husband, while his wife and I enjoyed a 1 hour gentler hike around a reservoir. On our way though, she first brought me to see the lot where a house had once been – this was just a few doors away from her own home. The house that had been here was decimated in last October’s Tubbs fire. 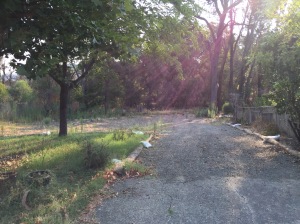 It was also sad on this morning to find smoke in the air and to find ash on our cars from the current Yosemite fire, as well as see how low the water reserve is right now. Otherwise it was a beautiful walk in the sunshine, and we could have hiked longer. We plan to do so on our next visit, along with going together to see Jack London State Park. 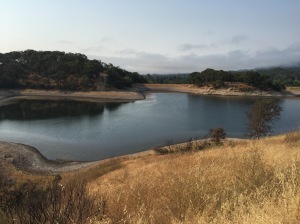 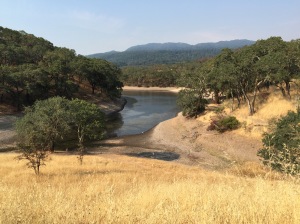 On driving southward Loren and I crossed the Golden Gate Bridge. I think I may have taken it for granted for many of the years that I have lived in California, though I never tire of seeing it. I realize now what an incredible landmark it is in the world. On this day, one of its towers was partially shrouded in fog, making it that much more alluring. 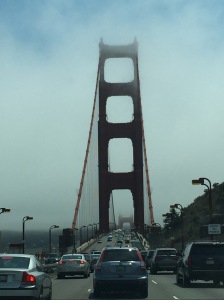 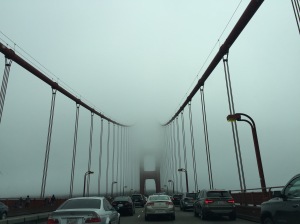 That afternoon we arrived at a dear friend’s home, where another very special friend was visiting from Ashland, Oregon. We had a short visit together before heading to other friends’ home for a fun evening and dinner. 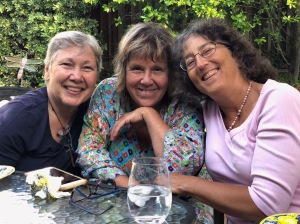 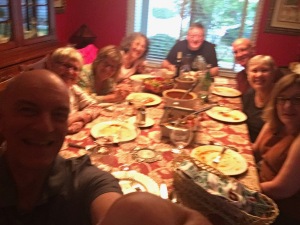 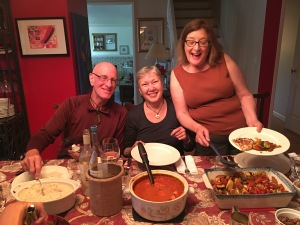 Over dinner I learned that Loren and I were familiar with the two pieces that our UU Fellowship of Sunnyvale choir would be singing the next day for a memorial service that we had also intended to attend. As the choir was not strong in numbers at rehearsals recently, I was delighted that we could add our voices to honor this long time friend’s life. 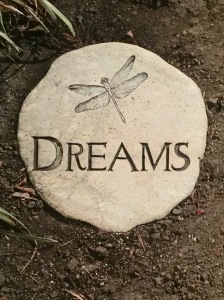 We had a sweet slumber party at our one wonderful friend’s home, then had a nice brief breakfast together before our other dear friend left to drive home to Ashland. Our one friend and I then enjoyed the walk to UUFS, while Loren drove our car to meet us. 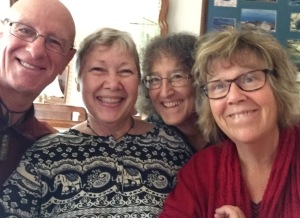 I shed my first tear of the day when we sang our children off to their Religious Education classes from the Sunday service. The song our congregation sings is one that a former choir member composed. I love the melody and meaningful lyrics, while it also brought back memories of having sung it in this precious community so, so many times before… 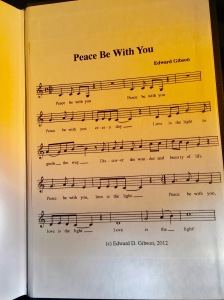 I shed a few more tears during the Memorial. I snapped a photo of one of the tribute photos afterwards. Two of the women in it, who were among the important female role models in my life, have now died. I am proud and grateful to have known them. 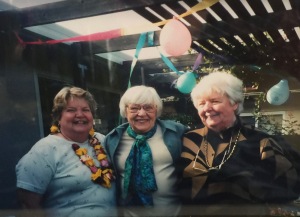 Later in the week we had a lovely brunch date with friends who will be moving soon to southern California. Somehow I overlooked taking a photo. However, today I can include a photo of their daughter – who we had visited with when we were in Adelaide, South Australia. I had forgotten to take her photo when we were together there, and she was kind enough to later send me the photo she took of herself for my blog! 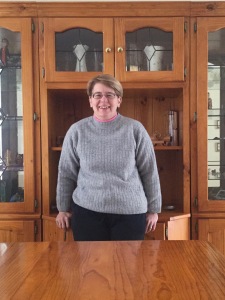 We also had a memorable lunch this week with cousins on Loren’s mother’s side. One of them brought an old family photo which was fun poring over to identify who was who in the extended family. Afterwards the one cousin and her daughter who live the farthest away came to Loren’s Mom’s house for a special visit with her and Loren’s one sister. 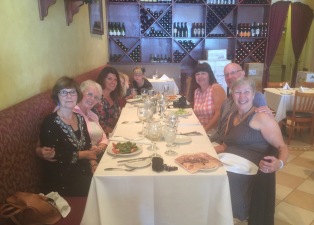 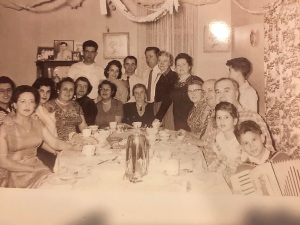 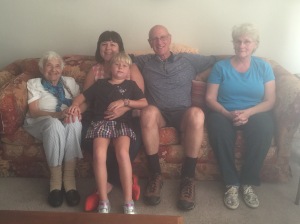 Loren and I finished the week over a potluck gathering with friends who are members of Loren’s first Toastmaster’s club. The couple who hosted have large owls nesting in a palm tree in their yard, and during the afternoon we could see one of them sleeping on a frond! Again, I forgot to take a photo of the event, but, I had spotted a feather on the patio which the host gifted to us and I attached to Loren’s hat. At least I can share that. 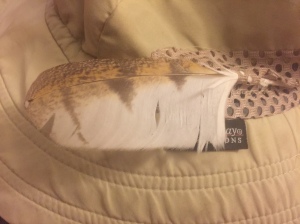 The big news this week too is that we began a new schedule. I taught my first two Bikram Yoga classes since we have been back, and look forward to more that I am scheduled to teach later this month. Loren too started a set schedule to be with his Mom. He is taking over one of the days when the paid caregiver had been coming each week, as well as helping out on other days. Now that we know which days, we are able to make time for such things as having our vaccinations for shingles, and other important appointments.

I will finish with our San Francisco Giants, who will be playing a large number of games this month. Watching them, especially when they win, has become an enjoyable pastime. 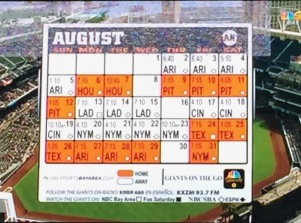