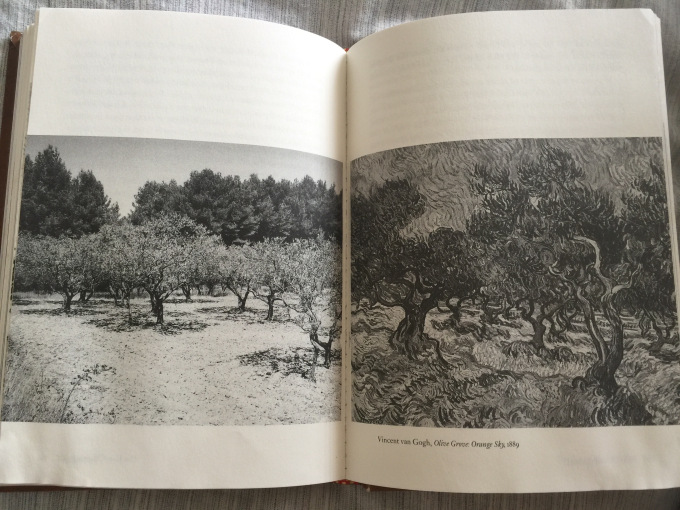 We are definitely noticing early signs of autumn here, maybe you are too. Indicators are how the sun goes down earlier, we have some cooler air, oleander trees and bushes are losing their blossoms making colorful carpets on the ground, even a couple of trees in the neighborhood have already turned half of their green leaves to a lovely peachy-rose. 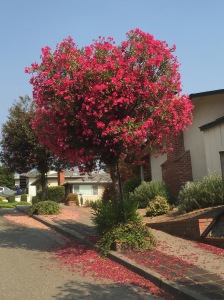 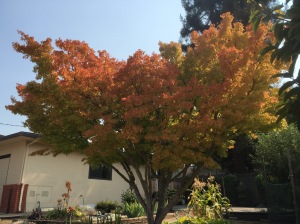 A nice event for us this week was when Loren hosted a BBQ for his Mom & sister at their home. It was intimately the four of us, and his grilling was appreciated. Another highlight was that in teaching two more Bikram yoga classes this week, I noticed that while I have usually felt like I provided the yogis attending with a decent class, I felt proud to find my dialog flowing more professionally. It seems like I have moved on from being a beginning instructor to more of an experienced one. I look forward to leading my next scheduled class this coming week.

Loren and I also visited a newer medical center, trying to track down some of his earlier medical records. When we walked in, we immediately recognized the glass chandelier as a Chihuly, from when we first saw this art style at the Bellagio in Las Vegas back in 2009. We have since seen more displays of this art in other places through our world travels.

A big event for us this week included more appreciation of art – that of Vincent Van Gogh. In preparation for it, I read a chapter in Alain De  Botton’s The Art of Travel, which Loren was reading. His timing could not have been better. De Botton includes the unique style Van Gogh took in representing nature by publishing companion photos of the original subject and Van Gogh’s rendition. I have to say that I actually find Van Gogh’s renditions more appealing than the photos show of the original scenes that he portrayed… 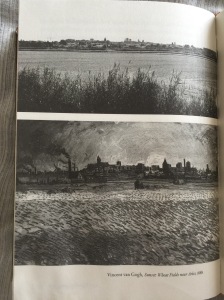 The event was held in Los Altos, a city near San Jose, at their History Museum. Attendees were invited to bring a picnic to enjoy in their gardens beforehand. Loren and I were joined by several friends from our UU Fellowship before the main event… 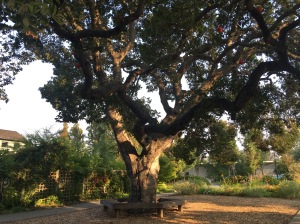 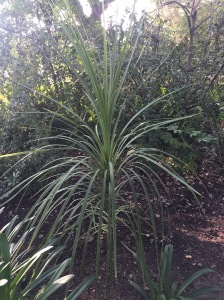 After our light meal, we were invited to browse the current indoor exhibition of local artists’ renditions of areas of the history of Los Altos. Three pieces stood out for me – the one of the Hewlett and Packard garage as I worked at HP for some years, another is the heritage orchard which reminds me of the similar one in Sunnyvale where Loren and I lived for many years before moving to San Jose, the third is the childhood home of Steve Jobs with another famous garage where his and Steve Wozniak’s Apple was started… 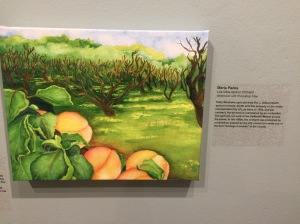 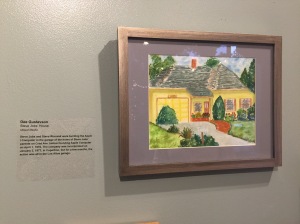 And, the main event that evening was an outdoor showing of the movie Loving Vincent.  A few more of our friends arrived to watch with us, making it extra special. The movie was just as good as Loren and I remembered from when we first saw it in New Zealand in February. I laughed and cried again, one benchmark for me of a wonderful movie!

After the fun comes the sad news this week in that early on we have awakened to strange looking skies, filled with smoky haze from the tragic raging fires. Now the weather has turned and our skies here are clear again, but the public servants’ battles continue, to bring containment.

Speaking of tragedy, I was reminded this week of one from my own family’s history. My brother and his beautiful family are in Florida for vacation… 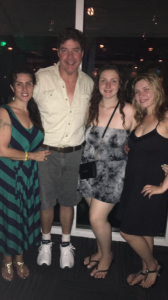 and they tracked down the address of the oceanfront home from where, back in 1955, my great-aunt and her husband mysteriously disappeared. That was two years before I was born. It took five years to solve the case of their murders, an excruciating period of time for our family elders. I had always heard of Manalapan as the sparsely populated place were this couples’ lives were cold-heartedly extinguished. I had looked for it once or twice on a map, but had never made a priority to try to find the exact spot when I was in Florida in the past. Through my brother and his family’s visit there this week and our FaceTime afterwards, I almost feel like I have been there paying my respects too.

The location is now unofficially designated “Chillingworth Curve” per one of the articles that commemorate the 50th and 60th anniversary of the mindless crime in the respective links below. Their original dwelling is no longer standing, but its image is captured in the 60th anniversary article.

The current walled off structure that stands in its place and that my sister-in-law snapped a photo of, is part of an elite community there now.

I aim to finish this week’s post on a lighter note. August 10 was the Feast Day of San Lorenzo, or Saint Lawrence, martyred by edict of the Roman Empire. He is coincidentally Patron of Rome, students, miners, tanners, chefs, poor, and firefighters [emphases added by me]. I am attracted to this Saint in part because his name is the same as Loren’s in Italian, and many know how at times Loren refers to himself as Chef Lorenzo. My hope this week is that Saint Lawrence might provide protection to the thousands of our currently active Californian and other visiting firefighters.

The day following that – today, is the Feast Day of Saint Clare of Assisi. Ever since I stumbled across the notion of Feast Days a few years ago, I am always tickled to think how my namesake’s Feast Day follows Loren’s namesake’s Feast Day by one day. More commonly known as Patron of clairvoyance, eye disease, laundry, embroiderers, gilders, needleworkers, good weather, telephones, telegraphs and television, I discovered too that Saint Clare is honored in the Philippines as Patron of childless couples – to which category Loren and I are members.