At the start of this week, Loren and I were still in Ipswich, where our AirBnB host – who taught us about microwavable pancakes – took us for a kayak ride in Plum Island Sound. Fortunately she knew the water patterns and it was an enjoyable day, though we could see how easily it could have been grueling if instead we had been fighting the currents. We finished the evening playing a game of Scrabble together. 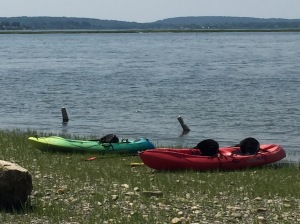 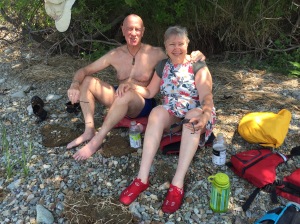 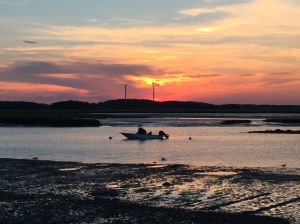 The next morning Loren and I took a stroll around Strawberry Hill. Unlike the trek we took on Poon ‘Hill’ in the Himalaya, this ‘hill’ is a flat walk on a mowed path to the water’s edge. Then we returned to the house for the Women’s Soccer Finals, where we watched the US defeat the Netherlands. 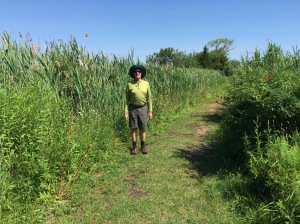 We also went on an historic town walking tour. Ipswich boasts several homes and buildings still standing from the 1600’s, 1700’s, 1800’s, reminding me how and where parts of early America was settled and claimed its independence. And everywhere tiger lilies are blooming. 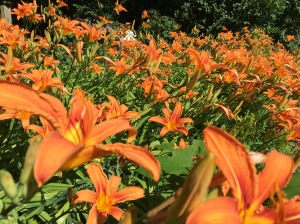 Then we were off to New York. We first stopped in for a final — for now — Bikram yoga class in North Andover.

Once in New York we drove through Frank Lloyd Wright’s Usonia neighborhood which we had seen last Thanksgiving, again in appreciation of his unmistakable home designs. Afterwards we read how UNESCO World Heritage thinks his works are extraordinary too, adding these eight of his innovations to their official list:
. Fallingwater in Pennsylvania
. the Guggenheim Museum in New York
. the Hollyhock House in Los Angeles
. the Jacobs House in Wisconsin
. the Robie House in Chicago
. Taliesin in Wisconsin
. Taliesin West in Arizona, and
. the Unity Temple in Illinois
We finished our day with a wonderful evening with my brother, his wife and younger daughter, then spent the night at an AirBnB in the Battle Hill neighborhood of White Plains, named for one of the sites led by George Washington in the Revolutionary War.

Our connecting flight the next day took us through Detroit, then we were on our way to Omaha. Dear cousins from Denver picked us up, and as we drove south, we were in Iowa for about one mile, which their new car’s navigation system loudly announced upon our brief departure and reentry into Nebraska. Along the drive we stopped for a lovely dinner together. Then we arrived at the precious farm where Loren’s first cousin lives. 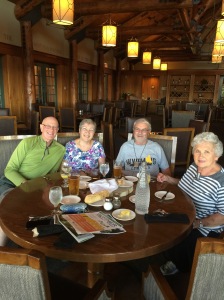 We had a lovely first day at the farm, then while this cousin was attending to the needs opening the County Fair which she oversees, another cousin took us on a tour of rural cemeteries in nearby Rulo and Falls City to find family plots. Here I noticed markers proclaiming certain headstones as “G.A.R.” I came to learn that these denoted the soldiers who served in the “Grand Army of the Republic” during the Civil War. Over dinner with these cousins we toasted with “Bloody Beer,” a drink of tomato juice mixed in with beer. 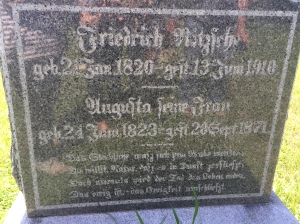 In the morning we helped a cousin with a small part of his home remodel, holding up a mantel piece for him to bolt in place. Then we reminisced about the history of this home, which was beautifully preserved for the ages through paint on an old saw.

This is also where Loren remembers 50 years ago this month watching the old black and white television in this living room when Neil Armstrong said his famous quote heard over the airwaves on being the first person to land on the moon on July 20, 1969:

That’s one small step for man, one giant leap for mankind.

He also proudly showed us the buckets of trophy home run balls his daughter has earned over the last few years, as she approaches her junior year in High School this fall. 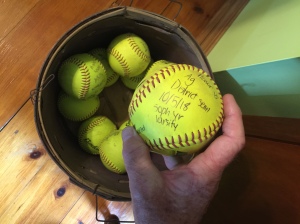 We bade our Denver cousins a safe drive home before we headed off to see the goat showing competition at the County Fair… please read more on this in next week’s post.