It was another memorable week in Castro Valley, California and its environs. Loren and I started our week attending an informal dance show put on by one of our AirBnB friends. He is 13 years old and will turn 14 next week. He has been able to claim part of the AirBnB garage for his dance studio. He is quite the gentleman too – of the four women among us in attendance, he invited me – the oldest woman, to share a dance with him. 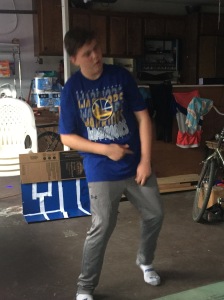 The next day was Memorial Day, and with him and his Mom Loren and I went to see Aladdin at the local theater. It was an awesome rendition of the story! At one point I was laughing so hard that I cried, which opened the gates for me to shed more tears as the plot thickened. In that way it exceeded my bar for a movie – they are the best when they elicit me to laugh and also to cry.

In preparation for the Golden State Warriors Finals Game 1 also this week against the Toronto Raptors, our friend – the Mom, created this appealing poster, which recognizes the team’s recent history, slogans, sport and colors.

Loren and I also enjoyed a few meals with friends this week. One evening we had a fabulous dinner with one dear friend at an Italian restaurant. A highlight of the meal was drinking a bottle of Nebbiolo together, an Italian wine from the Piemonte region of Italy, where Lorens mother’s parents each hailed from.

Another day we enjoyed a coffee date with a couple who were at our wedding. In fact he was Loren’s Best Man. We lingered over our drinks for a few hours and could easily have spent more time in good conversation together. Towards the end of the week, Loren and I had a fun lunch date with another couple to try a New York style thin slice cheese pizza.  It was doughier than I remember from New York, but the flavor was indeed reminiscent of slices I had as a child. I noticed the smiles on the face of the one friend were so much more pronounced than I had ever remembered seeing, and I attribute that to her recent retirement, or, maybe it is that the preparation for their daughter’s wedding that they recently hosted at their home is now behind them. 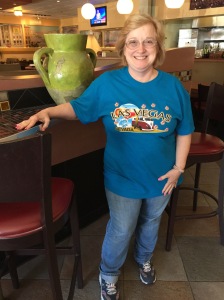 This week too, I completed my 30 day Bikram Yoga challenge! It feels good to have gone everyday for a month, and I continued the challenge – today I took class for my 32nd day  in a row. Not all who attempted the challenge completed it, but at least several gave it a whirl. It was also fun to see the studio manager’s puppy there one day. It seems that just a few weeks ago the manager was holding her puppy in her arms like an infant, but now she is much too big for that. She brought her in to the studio for the first time in a long time, as the pup is recovering from being spayed this week.

The most important event for us this week is that we formally celebrated the life of Loren’s Mom. It was a small gathering, beautifully coordinated by Loren’s sisters, and it was a wonderful tribute. From the tasty fare, to the photo collages, to the meaningful conversations with special friends, neighbors, coworkers and family, and, the heartfelt remembrances and accolades, I am sure she would have been touched if she could have been there in person. Her daughters even thought to display her favorite poem, Joyce Kilmer’s Trees. To use one of Loren’s Mom’s favorite phrases, the event was Super Duper! 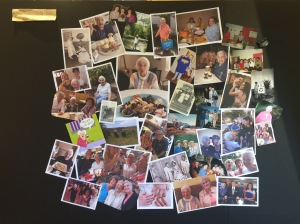